Where to Find Me

The time has come for me to stop posting new material here on Book Clutter for good.  No unhappy feelings here, or any dramatic reasons for departure.  I think I just realized I'm not really a blogger anymore. Such great memories and experiences though!

You can try me on Twitter, although I'm much less regular on there. I'm hoping to keep up with some bookish events and that will bring me there more frequently.

Thanks to anyone who visited or commented over the years. You have filled me with joy!

I will most likely spend any freed-up time working on my teaching credential, hopefully opening an Etsy shop soonish, and listening to Hamilton over and over again, anxiously awaiting its arrival in Southern California August 2017. Wait for it. Wait for it.

I started out the year totally gung-ho about the blog, and then spent a few months ho-hum, and lately back to gung-ho.  I know this is the nature of book blogs--it's an old story.

One of my goals was to review every book this year. I have not been as diligent as I had envisioned. To get back on track I printed out all of the books read this year and crossed out the ones I've done, and then of course I'll cross the others off as I do them.  Kind of fun! 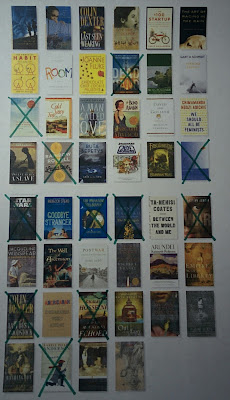 Last night, though, I was in one of those "What's the point?" kind of moods and I thought I should really just throw in the towel on the review goal.

So, until I make any decisions, I'm going to join in on the latest Classics Club spin. Last time I got Germinal, which I actually finished, and loved, but it's over there on the "to-review" list.  Soon.  But for now, here's my list:


1. The Last of the Mohicans by James Fenimore Cooper ***Winner***
2. The Europeans by Henry James
3. The Vicar of Wakefield by Oliver Goldsmith
4. The Ambassadors by Henry James
5. Kidnapped by Robert Louis Stevenson
6. Possession by A.S. Byatt
7. He Knew He Was Right by Anthony Trollope
8. White Noise by Don DeLillo
9. Song of Solomon by Toni Morrison
10. One of Ours by Willa Cather
11. Vanity Fair by William Makepeace Thackeray
12. The Count of Monte Cristo by Alexandre Dumas
13. The Good Soldier Svejk by Jaroslav Hasek
14. Forsyte Saga by John Galsworthy
15. The Woodlanders by Thomas Hardy
16. Babbitt by Sinclair Lewis
17. The Caine Mutiny by Herman Wouk
18. I, Claudius by Robert Graves
19. A Handful of Dust by Evelyn Waugh
20. The Reef by Edith Wharton

Posted by Shelley at 9:25 PM No comments: