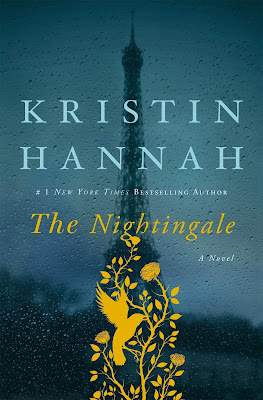 "I know now what matters, and it is not what I have lost. It is my memories. Wounds heal. Love lasts. We remain."

"How fragile life was, how fragile they were. Love. It was the beginning and end of everything, the foundation and the ceiling and the air in between. It didn’t matter that she was broken and ugly and sick. He loved her and she loved him, All her life she had waited -longed for - people to love her, but now she saw what she really mattered. She had known love, been blessed by it."

Keep a box of tissue nearby while reading this one.  You'll need it for the inevitable blubber-fest, and a tissue makes a convenient bookmark for when you're reading into the wee hours of the night and you're too tired to find the sleek metal one engraved with a George Eliot quote that you paid ten dollars for and never seems to be there when you need it.

This is a widely- read book by now, so I'll keep the summary brief. Hannah tells the story of two sisters and the different courses their lives take in response to the invasion of France by the Nazis during World War II.  Vianne lives a quiet life with her little family, very much dependent upon her husband until he leaves home to fight for France.  Initially, she accommodates herself to the new circumstances, hoping to keep her family safe and keep a low profile.   Her younger sister Isabelle is by nature rebellious, and passionately resists the occupation in any way she can.  Through the many harsh and emotional experiences they have as the war rages on, they learn about themselves, and what they are capable of.

Vianne's slow and sometimes frustrating transformation was a little terrifying for me to read because I saw myself in her.  You always wonder (at least I do) what you would have done in different historical events. Would I have been a Loyalist or a Patriot?  Would I have opposed or supported desegregation if I lived in the South? Would I have backed Hitler when he brought order and pride back to prewar Germany or recognized him as a monster? Of course I'd like to think that I would have resisted the easy path. But I could see myself making some of the same choices Vianne did.  I'd like to think that I wouldn't have offered my best friend's name to the list of Jews the Germans were compiling. But without the hindsight we have now of what happened to the Jews, would I have rationalized the way Vianne did even thought she sensed something was off? But thankfully Vianne grows and changes, and becomes just as much the hero as her impetuous sister, but in her own way.  There is hope for me!

In contrast, Isabelle's story is one of  reckless bravery and passionate romance. Yeah, I really can't relate to that at all. However foreign to me, her narrative contributes the main drama that keeps the finger swiping across the tablet. Under the false identity of Juliet Gervaise, she transports Allied airmen across the Pyrenees into the safety of Spain. She survives a gunshot wound, nurtured by the dashing Gaetan who finally submits to his love for her. As unlikely as some of the romance scenes seem to me, I found myself a little swept away.  Except for their first kiss. Isabelle thinks about how her romantic novels finally made sense, and she realizes that the "landscape of a woman's soul could change as quickly as a world at war"(57). All I could think about was how they probably hadn't brushed their teeth for the three days, and were covered with "sweat and blood and mud and death"(56).  Oh, to be 18 again, I guess.


Overall, this is great historical fiction that is entertaining and empowering, poignant and inspirational.