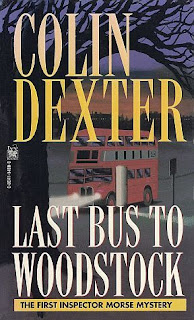 "And please let it not be forgotten that I am Morse of the Detective as Dickens would have said.  Oh yes, a detective. A detective has a sensibility towards crime-- he feels it; he must feel it before he can detect it."

With the last season of Inspector Lewis airing on PBS this month, I was possessed by the binge-watching demons and decided I needed to re-watch all the previous episodes before the grand finale. I have the very last episode on deck, and I must make the viewing of it an Event. I will miss the Lewis-Hathaway duo, but am looking forward to Season 3 of Endeavour, and also going back in time by watching the original Inspector Morse episodes. I've only seen one or two, and as a bookish sort of person with too much time on her hands, of course I decided I needed to read the books that inspired the show and the spin-offs first.

Honestly, if I didn't have this great love of the television series to buoy me, I probably would have been rather ho-hum about Last Bus to Woodstock. Inspector Morse (no Christian name given) teams with Robert Lewis to solve the murder of the young blonde Sylvia Kaye, who also appears to have been raped. Morse almost haphazardly explores one theory and then another as Lewis observes in bewilderment:

Morse jabbered on, his mouth stuffed with fish and chips, and with genuine concern Lewis began to doubt the Inspector's sanity...Or had Morse been drinking?

Insane, drunk, or just in agony after injuring his foot falling off a ladder? Or maybe that's just Morse. The unveiling of his character entertains more than the solving of the mystery (as is the case with most of the mystery books I love).  He can be abrasively candid one moment, hopelessly in love the next, and finds an appropriate bit of poetry to apply in both instances.  Although he appears overly confident, he doubts himself miserably when he's alone.  But a hot shower and a shave can pull him out of his doldrums instantly. His love of Wagner is only briefly touched upon in this first installment, but I could still hear opera in my mind as I read. I liked Morse, but sometimes I felt like I was watching a train wreck. And that made me love him.

I didn't find the mystery itself very remarkable.  A lot of information is withheld from the reader until the end. The assumptions about rape are antiquated and offensive. Red herring characters having affairs and pornography addictions are not particularly intriguing. I would have loved more of a connection to Oxford and more literary allusions that tied into the crime, a la Lewis. But maybe you have to have a Hathaway for that to work.  Or maybe that's to come in subsequent novels.  Which I am planning to read still. Twelve more to go.

Overall, this was a quick and light read, and a modest beginning to all things Morse, Lewis, Hathaway, and the prequellian Endeavour.

Random note:  I just realized while I was writing this post why I've had "The Last Train to Clarksville" by the Monkees stuck in my head this last week.