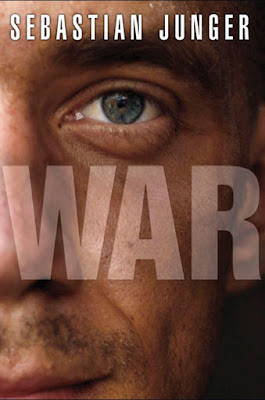 
War is a big and sprawling word that brings a lot of human suffering into the conversation, but combat is a different matter. Combat is a smaller game that young men fall in love with.

These hillsides of loose shale and holly trees where the men feel not most alive--that you can get skydiving--but the most utilized. The most necessary. The most clear and purposeful. If young men could get that feeling at home, no one would ever want to go to war again.

Between June 2007 and June 2008, journalist Sebastian Junger took five trips to the Korengal Valley in eastern Afghanistan, a volatile area "too remote to conquer, too poor to intimidate, too autonomous to buy off." There the insurgency engaged in raids and ambushes at a level of intensity and frequency unequaled by any other area in Afghanistan. Junger chose to be embedded with Battle Company, Second Platoon precisely because of the high stakes involved. His goal was to find out how soldiers function in a hyper-dangerous situation in an isolated area. How do they deal with fear? How do they feel about killing?  What kind of relationships do they form and how does that affect their effectiveness?

For the most part setting aside the big picture--the context of the war, political wrangling, and ramifications of the counterinsurgency--Junger focuses on the most primal emotion--their need to survive. A successful unit (one that "survives") is one that choreographs its actions best, in which each member makes decisions not about what is best for himself, but for the group as a whole. Whether they live or die can depend on this group functionality based on a complete sacrifice of self.

This reveals the somewhat uncomfortable truth that Junger exposes that even though war is horrible, it is not all bad. Often these young men have a sense of purpose and a clear self-identity that they never had before. They have a brotherhood with a rock-solid assurance that each would sacrifice himself for another in a heartbeat.  As Junger points out, this is not a situation that is often replicated in every day life. But in the Korengal Valley, it was a certainty that was empowering for both individual and team:

You could be anything back home--shy,ugly, rich, poor, unpopular--and it won't matter because it's of no consequence in a firefight, and therefore of no consequence, period. The only thing that matters is your level of dedication to the rest of the group, and that is almost impossible to fake (page 234).

Combat is also very exciting--an adrenaline rush. Scary as hell, yes, but also potentially addictive. Junger suggests that one of the most traumatic things about combat is having to give it up and return to a normal life. They "miss being in a world where everything is important and nothing is taken for granted."  Nearly everyone who died in the Korengal Valley died at unexpected times, making them aware that anything they did was "potentially the last thing they'd ever do." How does this affect life after service?  For one soldier it could mean a life always yearning for the intensity of combat and the inability to create as strong of a bond with anyone other than his brothers that fought by his side. Another soldier might continue  to serve many years to hold on to the structure and relationships forged. After returning to normal life after his time embedded with Battle Company, Junger experienced an amplification of emotions, finding himself moved to tears at weddings and other happy occasions. Junger illustrates poignantly that war is bad, but it is not all bad.

War gave me a unique perspective on life in the military. I've been reading different war memoirs and accounts over the last year or so to better understand the sacrifice that individuals make to serve our country. Helmet for my Pillow by Robert Leckie and With the Old Breed:At Peleliu and Okinawa by Eugene B. Sledge are both excellent memoirs about WWII. American Sniper by Chris Kyle made me realize that a hero might very well be someone I would dislike in real life. Fearless by Eric Blehm is not so much a war account as the road to the decision of a drug addict to become a Navy SEAL. Although it was seemed overly sanitized, I admit that I cried like a baby through the whole book. War delved deeper into the psychological, physiological, and emotional experience than these other accounts did.

No matter how much I read I know that it is impossible for me to fully understand the experience of a soldier, but I feel the need to a least try to get a glimpse into the lives of those who put their lives on the line for a cause larger than themselves. Some might not enlist for patriotic reasons. Maybe they are trying to escape a life of trouble, or feel a need to prove themselves. Or maybe they feel like they were made for combat. Additionally, as War shows, once in combat the larger picture of the war is usually the farthest thing from their minds. Their "cause" becomes having each others backs through firefight after firefight. But intentions and tactics don't make their sacrifice any less. I'm grateful.