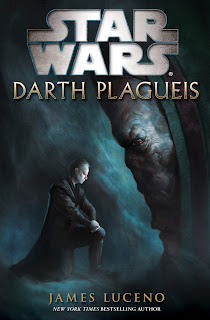 "For now, Sidious, know that you are the blade we will drive through the heart of the Senate, the Republic, and the Jedi Order, and I, your guide to reshaping the galaxy. Together we are the newborn stars that complete the Sith constellation."

I love Star Wars.  I missed out on the theatrical releases of IV-VI because my family didn't go to the movie theater very often.  It's possible we saw one or more of them at the drive-in, but I  never actually saw movies at the drive-in--I usually fell asleep quickly in my snuggly sleeping bag laid out in the back of our station wagon. But thanks to VHS I watched them as a teenager and fell in love with both the story and Harrison Ford. Like many others, I experienced the excitement and subsequent disappointment of the prequels in the theater, but learned to appreciate them a little more as I saw them through the eyes of my son.  I recently watched Epidosde VII (not right away and only once-what kind of fan am I?) and loved it. I cried a few times, most notably at the beginning when the music started, and then when the Millennium Falcon was uncovered.  Who knew that a "piece of junk" spaceship could make me cry as much as when Matthew proposed to Mary on Downton Abbey? (And as long as I brought up Downton Abbey, why do both of these shows want to mess with the characters I love?!)

So I'm a big fan, but I am not an expert. I have visited Wookieepedia on occasion, but have not memorized all the species, droids, and planetary systems in the galaxy. (Not that there's anything wrong with that.) If I were given a Star Wars exam, I'd probably get a high C at best. This is all just a warning that my thoughts on Darth Plagueis will NOT be an in-depth analysis or critique. (Think Jar Jar Binks rather than C3P0).

Summary
The main purpose of this installment of Star Wars Legends is to flesh out the backgrounds of three Sith: Darth Plagueis, Darth Sidious, and Darth Maul. Darth Plagueis is introduced to the reader in a scene in which he kills his master and reveals his obsession with manipulating midi-chlorians in order to defy death. Known as Hego Demask in public, Plagueis uses his influence as the CEO of a prosperous financial group to eliminate anyone who threatens his power.  He has an uber-creepy lab where he conducts his midi-chlorian experiments.  He is cold, calculating, and cruel.

He of course needs an apprentice, which he finds in a young, ambitious Palpatine who has murdered his entire family.  Impressed by this and sensing that Palpatine is strong in the Force, Plagueis trains him and christens him Darth Sidious. He becomes an ambassador and then a senator of Naboo, and then seeks to become Chancellor of the Republic as seen in The Phantom Menace. While visiting Dathomir, Sidious adopts a cute little Zabrak named Maul and trains him in the Dark Side. After killing Plagueis (who never quite gains master over death), Sidious takes on Darth Maul as his apprentice.

The novel is filled with assassinations and maneuvers orchestrated by Plagueis and Sidious to create an atmosphere conducive to securing ultimate power. The philosophies of the Dark Side of the Force and the Sith organization are discussed, as well as the origins of the Clone Army in greater depth than explained in the movies. Anakin's future role as envisioned by Palpatine is touched upon at the close of the book.

Review
I really enjoyed all the background information on these characters.  The book reads almost like a history book, with emphasis on economics and politics. The strength is in the details rather than an engaging plot. It is very dark, understandably so since it is concerned almost exclusively with evil characters.  I usually appreciate some balance between good and evil, which this book lacked. I think it just needs to be placed in the context of the entire story and you need to have Obi-Wan Kenobi and Luke Skywalker ever present in your mind as foils so things don't get too depressing. Flashes of Han Solo couldn't hurt either. (I love you.  I know.)

Audiobook Review
I switched back and forth between the ebook and the audiobook, which is sort of a new experience. The most exciting thing was that the audio version, read very dramatically by Daniel Davis, had sound effects!  It took a little while to get used to, but eventually I felt like they really enhanced my listening experience.  I would definitely try out an audiobook version of another Star Wars novel.