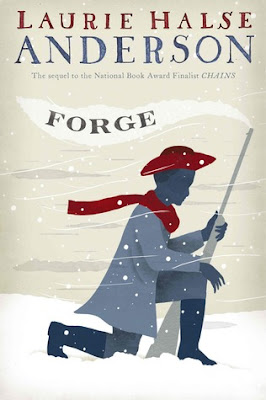 "What shall be my rate of pay sir?" I asked.
"Pay?" His brow wrinkled again.
"I know that many officers have hired soldiers to be their manservants, but I do not know what they are paid."
"Ah." He grasped his hands behind his back and stared at my bare foot before looking at me straight in they eye. "Curzon," he said softly, "I own you."


I read the first book in the Seeds of America series, Chains, about six years ago.  I loved it, stamped it with five stars on Goodreads, and eventually forgot everything about it!  So when I opened up Forge and began to read, Curzon was like a new character that I had never met. But I liked him right away, as I'm pretty sure I must have in Book 1.

As the story begins, Curzon and Isabel have run away to freedom, but are soon separated when Isabel insists on journeying to Charleston to find her sister Ruth. Curzon ends up right in the middle of the action of the Second Battle of Saratoga and then moves on to Valley Forge as a soldier in the Patriot Army. He forms a complicated but rewarding relationship with Eben, a friendly guy with a huge heart who doesn't quite grasp the paradox of fighting for America's freedom while denying freedom to the slaves. But you can't really blame him because no one at the time did.

At Valley Forge, Curzon suffers through all the deprivations that the encampment is known for, as well as a devastating return to slavery under his old master. Curzon's trials are not enough to keep him from thinking about Isabel. And suddenly there she is--but also enslaved again.  Their renewed relationship is a little rocky, but Curzon will do whatever he can to escape with her to Freedom, Take Two.

On an intellectual level, Forge is satisfying in its juxtaposition of America's fight to break the shackles of Britain's power and the efforts of Curzon and Isabel to gain lives of self-determination. But it's also just a really great story, with a colorful cast of characters (loved Benny injecting the Greek myths into everything), page-turning suspense, quirky humor, and even a touch of romance. I also loved the quotes from primary sources at the beginning of each chapter, and an awesome appendix with questions about the historical details of the book.

My only regret is reading this too soon--Book 3, Ashes, is scheduled to be published October 4 of this year.  Will I have forgotten everything by then?  Maybe, but this time I think I will at least remember Curzon--he truly won my heart.