And the Mountains Echoed by Khaled Hosseini 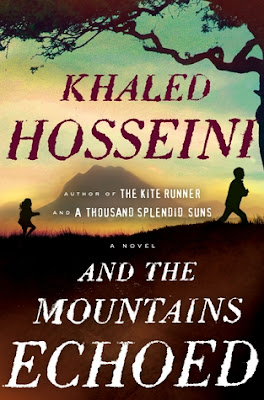 
All good things in life are fragile and easily lost.

Cruelty and benevolence are but shades of the same color.


A bedtime story should have a balance between delight and comfort--a tale to send the listener off into the land of Nod with positive, peaceful vibes. This is not the case with the story that Saboor, a loving but impoverished father living in a small Afghan village, tells his children Abdullah and Pari at the opening of this book. "So then," he begins.  "You want a story and I will tell you one."

He then continues to tell them about a poor farmer who must sacrifice his favorite child to a div or the whole family will be killed. They must "cut off the finger to save the hand."  When he travels to the div's fort to kill it and retrieve his son, he is given a choice.  He can take his son home, depriving him of the joyful paradise that the div has provided, or he can let his son stay, which means the heartbroken father will never see his son again.  He chooses the less selfish choice--to let his son stay and live a better life than he would back home. Mercifully, the div gives the farmer a potion that wipes away his memory, a reward for choosing his son's happiness over his own.

Thus the tone is set for the rest of the novel. Not a narrative to send one off into sweet dreams, but rather a heavy load to keep one awake. Hard choices. Separation from loved ones. The haunting or forgetting of memories. Guilt. Hopeless causes. The morning after Saboor tells his children the story of the div, he sells Pari to a wealthy couple in Kabul.  She will have a better life.  Saboor's family will not starve the next winter. But Abdullah, who has a deep connection with his sister, will be heartbroken for years.

The separation of Abdullah and Pari frames a collection of stories of other characters that have some connection to the pair, but with timelines and heartaches all their own.  Pari's Uncle Nabi is in love with Nila Wahdati, the rich woman who buys Pari.  But she is always beyond his grasp, and she takes Pari to Paris with her after her husband has a stroke and he never sees her again. Mr. Wahdati has feelings for Nabi that will never be requited even though Nabi stays with him for the rest of his life. Pari's mother has a tragic past riddled with guilt, which she lives with everyday. These characters and several more all try to find meaning in tragedy while at the same time grappling with the potential for poison or distance in any relationship.

Hosseini also introduces a couple of other characters with weaker connections to the siblings, but they allow him to explore what people do (or don't do) to ease the suffering of others. Idris is a doctor (and former neighbor of the Wahdatis) who visits Afghanistan and meets a young girl, Rashi, who has been mutilated.  He promises that he will make arrangements and pay for her to have surgery.  Once he returns to America, though, he gradually rationalizes away the need to help her. On the other hand there is Amra, a foreign aid worker who gives up a normal life to help people like Rashi. She seems to be a naturally altruistic person who is genuine and dependable.  We also meet Mr. Markos, a plastic surgeon who works in turbulent places like Afghanistan (and lives in the Wahdati's old house).  We watch his growth from a child who shuns an acquaintance because he is horrified by her dog-mauled face to a self-centered young man traveling the world. But ultimately he takes on the role of a surgeon willing to risk his own personal safety to help other people. The message is clear--intentions are not enough.  If we want to make a difference and ease the pain of a troubled world, we need to take action, even though it is inconvenient, or even dangerous.

It is the inclusion of these stories of selflessness that prevent this collection of heartbreaking narratives from reducing the reader to complete misery. The chapters leap around in time which lends to a bit of confusion, but I just let go of the idea of having it all clear in my head.  The historical timeline is much less important in this book than Hosseini's others.  And the Mountains Echoed is more psychological, and the characterizations more complex than The Kite Runner and A Thousand Splendid Suns, and these take center stage over the events in Afghanistan and other settings in the story.

One complaint: I'm not a fan of using letters as a device in novels when they are much more personal than any letter would ever realistically be. Nabi writes a letter to Mr. Markos explaining the history of Abdullah and Pari, which is important, but he also includes details about his infatuation with Nila, Mr. Wahdati's obsession with him and other things. It's a long letter. I think an author needs to choose between a letter that is as impersonal as a letter to a stranger would be, or choose another style/device that allows all of the inner/personal details to be revealed in a more organic way. I don't know--maybe people are more open in their letters than I would be...

All in all, it's a beautiful book. Hosseini has already established himself as a masterful storyteller in his previous novels.  He applies his talents to a new format and a different focus in And the Mountains Echoed, and I loved it.