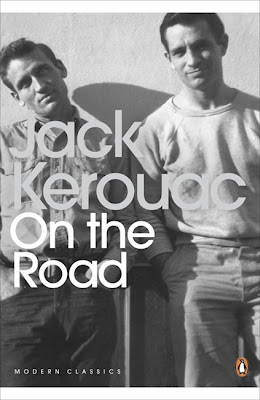 
Here I was at the end of America--no more land--and now there was nowhere to go but back.

"Whither goest thou, America, in thy shiny car in the night?"

We all realized we were leaving confusion and nonsense behind and performing our one and noble function of the time, move. And we moved!


I'm having an "off" day today--one of those days when I just can't focus on anything. It's like my brain is stuck between radio stations and I feel like my chest is full of bubble wrap that needs to be popped. My to-do list looks like ancient runes.  I could clean, but won't it just be dirty and messy again tomorrow?  I could eat, but according to the Internet, 99% of food will be the death of me or the earth.  I could work out, but I've pretty much accepted that my ripped physique will forever be camouflaged by a jealous layer of adipose. Everything I think of doing just seems so...pointless. And then I realized I am in the perfect state of mind to write down my thoughts about On the Road.


Narrator Sal Valentine (real-life Kerouac) and his main traveling companion Dean Moriarty (real-life Neal Cassady) seem to be plagued by this same lack of focus and feeling of futility. Only for them it's not just an "off" day.  It defines their lives. The remedy?  Drive!  They frantically criss-cross America, searching for some insight into the meaning of life.  They don't really know what they're looking for, and maybe they don't even need a definitive answer, but they know that what they seek can't be found in the conformity of post-World War II America.

Sal seems like a nice-enough guy.  He can appreciate a good slice of apple pie, he's passionate about music, and he has a thing for the way people laugh. The excitement he feels about embarking on his first trip across the country is contagious.  I wanted to join him--at first.  At least as long as there was a reliable source of apple pie and ice-cream. But there are other aspects of the road trip that would have me hitchhiking back home faster than Dean Moriarty can park cars in a New York City parking lot.  One of those things is Dean himself. Dean talks too much, drives too fast, and wears me out.  But for Sal, Dean seems to be the crux of it all.  Dean, the manic drug/sex-addict who abandons him in Mexico with diarrhea and delirium. Does his life hold all the answers? That possibility fills me with an empty feeling and I feel truly "beat."

Other reasons I would get off the trip: drugs and bugs. Heavy drugs and bloody bugs.  No thanks.

But the driving everywhere bit sounds glorious. I've been on some great road trips and passed through some of the same cities Sal visits.  America is beautiful. It all seems like a romantic, adventurous lifestyle for Sal and his companions.  Until you number the casualties.  Wives left behind on a whim.  Children abandoned.  Not to mention the drug and alcohol abuse of these Beat pioneers and the toll it took on their own lives. I sound so stodgy and mainstream, don't I?  I'm a fan of stability, roots, being a productive member of society.  I want dads to be there for their kids and for wives to be respected by their husbands. I don't think people should steal cars.  It scares me that people saw this as an inspirational guide book. Wouldn't Frommer's be adequate?

I'll admit that I don't have a good sense of what they were rebelling against.  Without living during that time period, can I really fathom what societal pressures led them to break free in such an extreme way?  Were those who were considered different severely marginalized?  Did it take the Beat generation to shun conformist society so completely that in the end we at least ended up with a happy medium between responsibility and non-conformity?  Did they feel as though society didn't do anything for them, so why should the do anything for society?  Or was it a matter of principle--that society is inherently too restrictive for anyone to find meaning and happiness?  What do I take for granted in today's world that is a result of the Beat movement? Lots of questions that I haven't answered yet.  But I will ponder them here at my laptop instead of on the road, at least for now.

Tomorrow will be a better day for me.  Most likely I will wake up disgusted at myself for wasting a perfectly glorious commitment-free day.  I will dust something because I like the smell of the lemon oil.  I will eat an apple even though the ones I bought were sprayed with pesticide.  I will work out because my strong muscles at least help me carry that extra fat around, and because it's fun. Sometimes there is a point to doing things just because you enjoy the process or the journey, without worrying about the outcome.  Oh, wait--was that what Kerouac was trying to tell me? 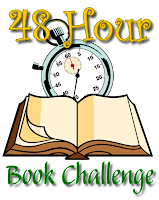 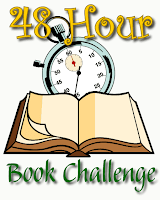 I'm participating in the 48-Hour Book Challenge, hosted this year by Ms.Yingling Reads.  Details can be found here.  I'll start right now around 8:30 p.m. my time, and hope to read as much as I can between now and Sunday night.  I've places to go and things to do this weekend, but I'm still hoping to cram more reading in than usual.
This challenge is open to all types of reading, but I always look forward to reading any Childrens and Young Adult books I've been wanting to get to for this one. Here's my pile: 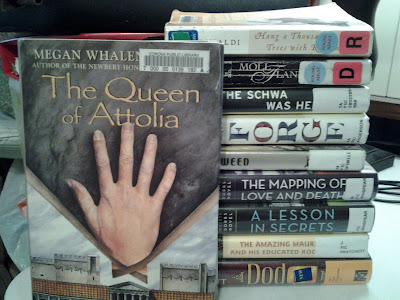 I'll be starting with The Queen of Attolia.  I can't believe I've waited so long to read this one.  I've also thrown in a couple of Maisie Dobbs mysteries in there just because.  I also have two ebooks on my Nexus:  Finnikin of the Rock and The Knife of Never Letting Go. I've heard great things about both.

I know I'll probably only get to a couple of these, but it was so much fun to pick them out and make a book pile picture.  It's been way too long! 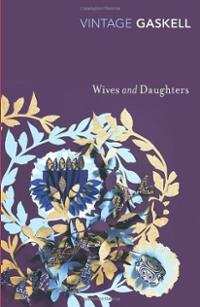 Unputdownables is hosting a group read of Elizabeth Gaskell's Wives and Daughters during the months of June, July and August. Oh, happy summer!  Today marks the end of Week 1, and at this point we are to have read through Chapter 5.  I'm not planning to update every week (the main discussion will take place at the read-a-along hub each Friday), but I wanted to share my initial thoughts and expectations.  Then when I'm done, I'll do a final review.

I may be jumping the gun, but I already feel that I'm going to love it.  I absolutely loved Cranford.  It was witty and heartwarming, and I loved Gaskell's writing.  But then I was disappointed with North and South.  Well, "disappointed" might be too strong of a word.  It's just that I was looking for some magical combination of the writing of Cranford with the story I was familiar with from the excellent BBC production, and it didn't quite meet my expectations.  But I still liked it. I later read Mary Barton, for which I have no review or thoughts on my blog.  I found it quite unimpressive.

I'm not sure if I would have picked up Wives and Daughters if not for this group read.  My Gaskell experience seemed to be going downhill. But so far, I am very excited!  From the first five chapters, I feel like I'm revisiting the wit of Cranford, and I love the characters.  I am hopeful for that magic I was looking for in North and South.  I think it's going to be a good thirteen weeks!

Posted by Shelley at 8:32 AM No comments: