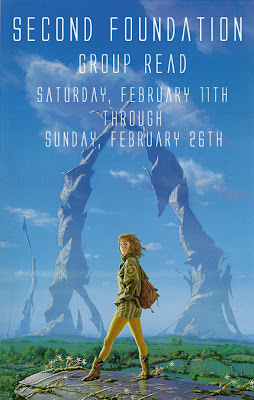 No pre-question rambling--I'll just jump into this week's questions from host Carl of Stainless Steel Droppings.  And be forewarned--SPOILERS!
1.  How have your perceptions of the Mule and his form of governing grown or changed, or not, after spending more time with him in this novel?
First of all, I was so happy that we were not done with The Mule.  I'm still somewhat in that protective mode where I don't get too attached to characters for fear that Asimov will jump ahead in time with a whole new cast.  My conflicting feelings about The Mule make him absolutely intriguing, and I wanted more.
I still have the same aversion to his mode of power.  I still feel empathy for him and the hardships and insecurities he faces being a mutant. I liked seeing his strength in strategy, and enjoyed being the spectator of another mental chess match. We got a glimpse into his mind--his doubts about his power.  I appreciated his recognition of the weakness in his control of others--that it takes away their initiative and drive and they end up weaker as a result.
2.  Having finally gotten a glimpse into the mysterious Second Foundation, what are your feelings/thoughts about this group and their methods (as revealed thus far)?
Because their mental powers were similar to The Mule's, I was a little wary that we would have yet another instance of an individual/group attempting to take away free will in order to reach its aims. I was happy to find out that although Channis' mind was altered, it was his own choice to undergo the surgery.  That was significant.  On the other hand, The Mule didn't have a choice when they changed his mind to eliminate his inferiority complex and other psychological baggage.  Yes, this did a lot of good for him and the galaxy. And he is getting a taste of his own medicine. But it still irks me a bit from an ethical standpoint.
3.  Has your understanding of the Seldon Plan changed at all with the revelations about the plan and the Second Foundationers near the end of this first part of our reading? Looking back does it alter any ideas you had about Seldon and his predictions?
From the reader's perspective, the whole aura of the plan seems to have been set aside during this part. Instead it has become a very pragmatic "Well, Seldon knew everything wouldn't go according to plan, so let's just do what we can to fix it." This quote struck me:

So [Seldon] created his Foundations according to the laws of psychohistory, but who knew better than he that even those laws were relative. He never created a finished product. Finished products are for decadent minds. His was an evolving mechanism and the Second Foundation was the instrument of that evolution (p. 65).

I'm guessing a lot of us are more comfortable with this view, as opposed to the almost religious fixation in the past with the Plan going down an unchanging route. The idea of an "evolving mechanism" meshes better with reality. It's much easier to accept.
4.  A simple one: How did you feel the first part of Second Foundation held up in comparison to the sections we've previously read?
It's among my favorite so far.  All of the mini twists and turns were intense, and it was great getting a different perspective about Seldon's Plan.  I've been curious about the Second Foundation from the beginning, so learning a little bit about it has been satisfying.  I hope there's more in the final part.
5.  It is perhaps not surprising that Asimov's second important female character in the trilogy would be a direct descendent of the first. What do you think of young Arcadia "Arkady" Darell?
She's smart and resourceful, and yet Asimov doesn't let us forget that she's still a fourteen-year-old girl.
More discussion on this first part of Second Foundation can be found here.