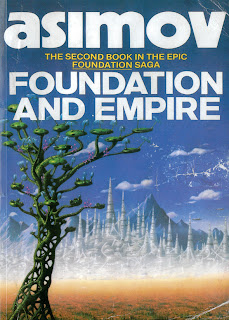 It seems like a lifetime ago since reading and discussing the first half of Foundation and Empire because in between the two sections I had to finish up Moby-Dick for another readalong and read Rebecca in two days for a book club.  So if I start talking about whales or a psycho housekeeper, you'll understand why.
Here are the questions for the week from host Carl, with SPOILERS!
1.  While it didn't break new ground, Asimov did have a female character who played a major role in this second half of the book.  What are your thoughts on how Asimov portrayed Bayta?
I'm pretty satisfied with the way Bayta is portrayed.  Both her brains and her heart saved them in the end.  And apparently she could whip up a yummy pie.

2.  Now that you know the Mule's identity, were you surprised or had  you figured it out along the way?  If you did figure it out, how did that affect your reading of the book?

I was reasonably sure of his true identity, but there was enough room for another possibility that it wasn't completely devoid of suspense.  The biggest clue for me was the Visi-Sonor and the concerts.  It was still enjoyable to find out at the end because there were many instances pointed out where he was influencing others and it answered a lot of questions.  In some cases I actually thought that Asimov was just being careless in his characterization, but in the end I realized he knew just what he was doing.  Oh, me of little faith!


3.  In previous posts we discussed the role individuals seemed to have in the unfolding of Seldon's plan.  How do you feel about the issue now that we've seen an individual derail Seldon's plans?

It's really kind of relief to me, even though ironically the individual is one seeking to take away personal choice through his control of emotions.  I need to know that one person can make a change, or else why would I try to do anything?  I've read Horton Hears a Who too many times to give up this ideal!
At the same time, though, did he derail Seldon's plans?  It sounds like the Second Foundation was set up to make up for any aberrations in the plan, so doesn't that make it part of the plan?
4.  Did it surprise you in the end that the Mule was allowed to get away?  Did Asimov make you feel any pity or empathy for the Mule, either as the clown and/or when you discovered he was the Mule?
I loved the mixed emotions of the ending.  I was both horrified by his actions and felt pity for him.  Just like Darth Vader!! 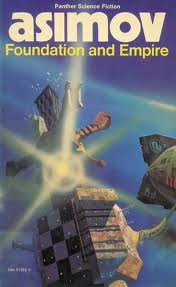 5.  How do you feel this story compared to all the other stories that have made up the two Foundation novels we've read?

"The Mule" was my favorite by far.  Admittedly, it has the comfort of a conventional structure, unlike the stories of Foundation.  But it was also in and of itself an excellent story.
6.  What final thoughts do you have about Foundation and Empire?
Loved it!  Five stars.  I'm ready to read the next installment--I've heard it's the best.
For more discussion and links, visit here. Thanks, Carl!