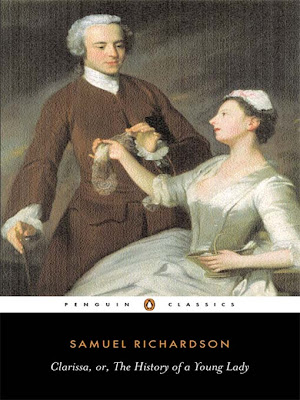 I will confess that I was testing the waters a bit before committing to a readalong of Clarissa by Samuel Richardson, considered to be the longest book written in the English language.  If it looked to be as torturous a read as the never-ending Tale of Genji,  I would surely have to pass.  But so far, so good. (Although The Tale of Genji had a promising start as well, followed by 1,000 pages of repetitive blah.)
There are a few things making this a positive experience thus far:
1.  This is a year-long project.  Hostesses JoAnn of Lakeside Musings and Terri of Tip of the Iceberg have come up with the wonderful plan to read the letters that the book is comprised of around their corresponding dates.  So in January, we have read six letters that Clarissa Harlowe has written to her dear friend Anna in January, explaining the current family drama, which so far includes a handsome rake, a jealous sister, a vengeful brother, and several other horrid people.  Clarissa (at least as she presents herself in her letters) seems to be the only one you don't want to slap.  In tackling this letter by letter throughout the year, I think I just may be able to get through this book.
2.  I'm reading this on my phone.  I lift weights (and groceries) all week long.  I don't need a big hunk of a book to haul around everywhere too.  Thanks to Overdrive and Project Gutenburg, I've downloaded the e-version and can take it with me everywhere I go (even to the orthodontist's office where I fell asleep today while reading it.  Twice.  This has nothing to do with the book and everything to do with the fact that I'm old I don't get enough sleep at night.)
3. Richardson is transparent.  He comes right out and tells us in the Preface that this story is meant to instruct us--or at least his contemporaries--in correct behavior.  No hidden agenda.  No tricking us into thinking it's "just" an amusing story.  Entertainment is okay, as long as it is accompanied by a strong moral message, which he makes very clear.  In this case he has two messages for us.  Parents, don't force your kids to marry.  Young ladies, don't fall for the bad boys.  Got it. Got it.  Do I even need to read the book if I've learned the lesson?  Ah, but I do want to learn more about the already irresistible rake Richard Lovelace.  Oh, crap!  I guess I don't have the second lesson down just yet.  I guess I'll have to keep reading.
4.  There are built-in Cliffs Notes!  I don't know if all editions are this way, but mine has a section in the beginning that summarizes each letter.  I skipped them for obvious reasons, but what an interesting concept!  Was Richardson trying to be helpful, or did he think his readers were idiots?  Or did he think that his words were so wise people would want to go back and find specific letters?  Maybe I'll have an inkling by the time the book is done.
So it's going good so far, and hopefully it will continue to be entertaining and, er, instructive.  For more thoughts on January's letters, check out a list of links here.