Yikes!  I'm a whole day late.  This was due to the three day weekend in honor of Martin Luther King, Jr. day.  No school for the kids and my husband took the day off of work, and so we celebrated by doing . . . yard work.  I'm sure I've missed the prime discussion period, but I throw my thoughts into the ring nonetheless.
Last week it seems I won the award for picking the ugliest of Foundation covers to display: 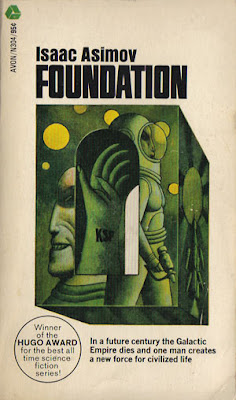 It's pretty bad, but then most of them are.  Thank goodness you can't judge a book by it's cover.  Although, I do love a good one. (Michael Whelan actually accomplishes this, thank goodness.) I guess the next best thing is a weird one.  This one interested me because I wondered what the "KSP" stamped on the hand meant.  Now I know, and I don't think it was a big enough of a deal to make the cover art.  But on with the questions from host Carl:
Spoilers follow.
Salvor Hardin was the first character in the book that we got to spend any significant time with.  What are your thoughts on the grande finale of his plotting, scheming and maneuvering to get the Foundation through to the next Seldon crisis?
I continue to be impressed by his shrewdness, but at the same time disturbed by manipulation of the people through the religion.  But that conflict is one of the things that makes the book so interesting to me.  I'm continually questioning which is the greater "evil" in my mind, violence or manipulation and never really come to an answer.  And pondering the possibility that I am a pawn in someone's big scheme for power. All in all, the overriding issue in this situation is expediency--doing whatever it takes to reduce the fallout from the breakdown of civilization by trusting in Seldon's predictions.  Hardin certainly has the brains and the resolve to make that happen.
What are your thoughts on the way in which control/manipulation to achieve Foundation ends began to shift with The Traders?
I anxious to hear other thoughts on this one.  It just reminded me of similarities to history where society shifted from a religion-based society to one dominated by trade.  In the book, The Foundation initially uses trade to sneak in the religion in order to gain power over the masses.  In the end, it ends up being the goods that have the most influence over the people.  Will the next change be the trade of information and services?
One of the interesting things about Seldon's psychohistory is how much one man can actually affect it.  In Foundation we see characters like Hardin and Mallow as key figures for positioning things just right to work towards Seldon's later predictions.   Do you see this as a contradiction to what Seldon said about psychohistory at the beginning of our story or part of an overall plan? Discuss.
I did see this as a contradiction.  The only thing I can think to explain it is that Seldon could predict that certain individuals would inevitably rise to the task and be a necessary agent for producing the desired outcome, although he wouldn't know exactly who those persons would be.  That somehow as a crisis develops, someone with the right abilities will move to the forefront and pull the right strings.  Or recognize the need to stand back and let things happen.
Did you see similarities or differences between the way in which Salvor Hardin and Hober Mallow operated and what are your thoughts about this final section of Foundation?  Would you have been content as a reader back then with how everything played out?
They both had a knack for anticipating events and being one step ahead of the other guy.  The also both significantly changed the societies of that area of the galaxy.  I'm curious to see if and what the next shift may be.

Has your concept/thoughts of what Seldon was trying to do changed at all since the book began?


I don't know that it's changed, but at first it wasn't clear that certain "crises" would be the pivotal events. It's not clear to me how all of that is going to help, so maybe I've missed the big picture.  I do keep wondering about the other colony on the other side of the galaxy.  What's up with that?
Any final thoughts on the story as a whole, its structure, what it did or did not accomplish, how it worked for you, etc?
I did not realize going into the book that it was structured as short stories, but it worked fine for me.  I'm definitely seeing the need to continue--I'm curious about a lot of things.
Looking forward the the next in the trilogy, and will again be participating in the group read: 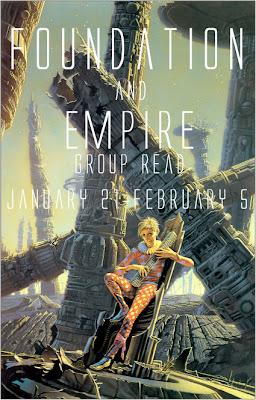 An inviting cover, but I am curious about the choice of wardrobe there.  Some sort of a court jester uprising?