I never formally declared my intentions for this group read, so here you go:

Maybe it's because of the suggestive "conquering" in the readalong title, or maybe it's because I only made it through fifty pages when I picked it up in another lifetime, but I really expected reading Moby-Dick to be a TASK.  I thought the group read format would be perfect, because what is more fun than poking fun at a stuffy classic, especially one with a title just asking for it? 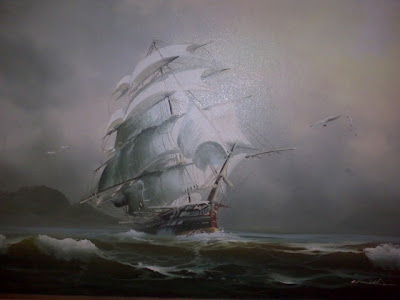 But so far there will be no poking fun (and I'll shelve any immature jokes), because I am really and truly enjoying it.  So far it's weird, and funny, and a bit over-the-top but in a tantalizing way.  For instance, Melville's not subtle when it comes to his whale/ocean imagery.  It pops up everywhere:  the painting at the Spouter Inn, Queequeg shaving with his harpoon, the pulpit that's like the bow of a ship, the codfish vertebrae necklace, and much, much more.  You cannot get away from it!  If I were to take a stab as to why Melville does this, I would say that maybe he's trying to establish a connection between the upcoming face-off with a monster whale and how it applies to everyday, landlubber life.  Or maybe he's just trying to set the mood.  Or maybe he just really, really likes whale stuff.
Whatever the case, I'm ready to take the voyage, get to know and fear Ahab, and enjoy all that cheese and butter that Captain Bildad was so worried about:  "Be careful with the butter--twenty cents the pound it was..."  Hopefully it won't just fatten me up as a tasty whale treat.
Yojo (the idol) tells me I should stop here, even though there are diverse topics that can be discussed. I wouldn't want to outdo Melville in rambling and digressions.  For more discussion and links to other posts, visit here.