I'm nearing the end of Robinson Crusoe, and finally there's a bit of action.  But it involves the discovery of cannibals who are having a little European "feast."  This seems like a good place to stop, take control of my gag reflex, and respond to the first prompt for the Classics Challenge found over at November's Autumn.  The focus this month is on the author of the classic we are reading.
I don't know much about Daniel Defoe (ca. 1659-1661 to 1731), but if there's one thing I've learned about him by reading the book, it's his fondness for the term "viz.", a rather hoity-toity way of saying "that is to say" or "namely."   Luckily he mixes it up every now and again by actually saying "that is to say."  He also LOVES capital letters.
So let's Find out Some Slightly more substantial Facts about Defoe.  First, Check him Out: 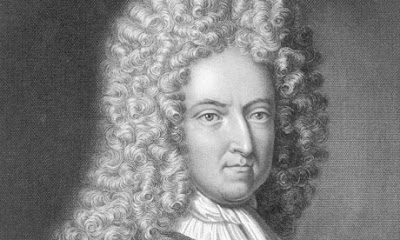 And I thought my hair was big in the 80's.  Perhaps when it came to wigs back then, size did matter.  As someone who changed his last name from Foe to Defoe to sound more aristocratic, I think he may be trying to compensate for something.
He wrote several books, (viz.) Robinson Crusoe, The Farther Adventures of Robinson Crusoe, Serious reflections during the life and surprising adventures of Robinson Crusoe: with his Vision of the angelick world, Captain Singleton, Journal of the Plague Year, Captain Jack, Moll Flanders, and Roxana.
In all he published over 370 (or 500 according to Wikipedia) works, including pamphlets and journals.  From hosiery businessman to government spy, he did just about everything and wrote on just about every topic imaginable.  He even spent some time in jail.  He lived through the Great Plague of London, the Great Fire of London, and later on, the Great Storm of 1703. I don't get the idea that he was very well liked or respected during much of his life.  Maybe that's a why a novel about being shipwrecked on an island alone for several years was appealing to him.  Or maybe he just thought it would be a good way to pay off all of his debts.
Whatever the case, I am enjoying Robinson Crusoe.  I feel like I'm learning how to survive on a deserted island and going to church all at the same time.  But more about that when (and if) I write up a review on it.  Defoe was much more prolific in his writings than I.  How he would have thrived in the blogging age!  And he could have ditched the wig.