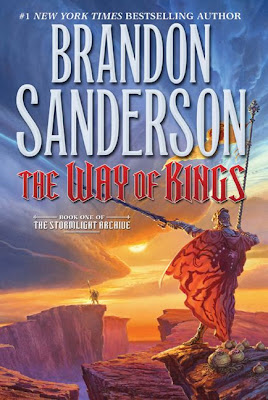 The readalong for The Way of Kings by Brandon Sanderson continues.  If you want to join in or find other thoughts on the book, check out the Polishing Mud Balls Readalong Page.
It is with great self-discipline that I put down the book before getting too far into Part Four.  Doesn't it just sound weird to say "Only 300 pages left?"  Kind of like getting excited that gas is now only $3.66 . . .
But of course I would rather read this book, even hundreds more pages of it, than fill up my tank.  I am finding Sanderson's doorstop to be such a page-turner, that I may even end up reading it while filling up my tank because I won't be able to put it down.
This weeks questions are brought to us by Memory:


1. Part III reunites us with Shallan, who we haven't seen for a few hundred pages, and separates us from Dalinar and Adolin for a few hundred more. How do you feel about leaving characters behind for such long stretches? Did you lose any of your connection to them during the break?
Somehow it works for me, even though some of the story lines/characters are left for hundreds of pages.  I had mentioned somewhere that I didn't miss Shallan much during Part II, but when she returned in Part III, I was riveted.  Kabsal freaked me out and I was trying to figure out if he was up to something.  I just kept wondering what was up with all that bread and jam!  But then there are a lot of things that just don't seem to add up about Jasnah's explanation of the poisoning.  I seriously do not know who to trust!  If Jasnah is lying, why?  Is it just another "hands-on" lesson?  Did she do some soulcasting when she put her finger in the jam?  Does that mean that she has a functioning soulcaster or doesn't need one?  Or did she just simply want to smell the darn jam? At one point I even thought Kabsal was working as sort of a spy for Jasnah to find out more about Shallan.  I don't get that idea now.  I have a million more ideas and questions about this whole storyline, so I'll just stop here.
I also didn't miss Dalinar, but now that I am beginning Part 4, I'm just as enthralled.  There is so much I want to know about the visions. And still, why his memories of his wife have been erased.  For something that has only been mentioned a couple of times, it occupies a lot of my thoughts!

2. So far, how would you compare this to other epic fantasies you've read? Does it remind you of any other series?
It does strike me as different than the fantasy I've read.  I have felt more of a connection to our world in other books, whereas Roshar seems quite alien.  Maybe I haven't read enough other fantasy to compare, but The Way of Kings seems quite unique.  Originality jumps out of every page.

3. How do you feel about the masculine and feminine arts? If you're female, do you think you'd be content to stick to scholaly pursuits, or would you rather do something physical, like go to war? If you're male, would you be willing to forgo learning to read, even if there were women around to read to you? What about the food? Does the spicy for men and sweet for women restriction fit your own tastes?

I think if I ate all those sweets I'd be fat and my teeth would fall out.  What guy would want me reading to him then?
4. What do you think of the flashbacks to Kaladin's childhood?

I look forward to them as they piece together the events in his life that have led him to his present condition.  He seems to have a pattern of depression that leads him to the brink and then he comes back even stronger.  Of course I wonder in each chapter of his past if we will finally find out the exact details of Tien's death.  I was a little vexed when that period of time gets skipped over and we return to the original battle scene from the beginning.  I liked the way we got a different perspective of the battle, and it made me appreciate more that the first time it was from Cenn's perspective.

5. Do you have any theories yet as to where the story is headed? What do you most want to see in the last quarter of the book?
In a nutshell, I want to see Kaladin and his group to escape, I want Dalinar's visions to be believed, and I have no clue what I want for Shallan.    But what I want may not be what's best for the story.  I'm sure Sanderson will play around a bit with what the reader wants to have happen, and what will actually happen.  I hope so.  I'm mostly hoping that at least a couple of things will have some closure, and that not everything is left for the rest of the series.
At this point, still more questions than answers.  Love it!