I'm a little late on this (if I had a nickel for how many times I've typed that...), but this last week I've been busy with eye surgery, which set me back a couple of days; one of my kids' birthdays, which included a trip to the mall (I hate shopping, but I love my daughter) followed by dinner at a restaurant (woohoo!);  and a Harry Potter movie marathon crammed into two days.  We're running a little bit late on that too.  Hopefully we'll see how "It All Ends" on Monday.
As far as Dune goes, in Part One we see how good Herbert is at giving us the 411 through dialogue, whether we liked it or not.  It slowed me down, but I liked it.  In comparison, Part Two was like running downhill after a steep climb.  Was anybody else just flying through the pages like I was?  I loved the shift in the pacing and the setting.
Here are this weeks questions, written up by Little Red Reviewer:
*Once again, this is FULL OF SPOILERS.* 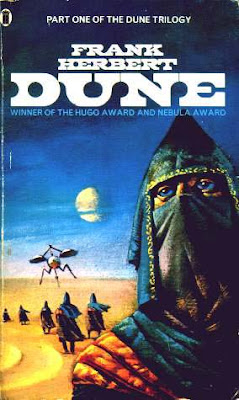 Was Liet's identity a surprise?  who do you think he really works for?
I wasn't surprised, but I'm not sure if that's because I've read it before or if the foreshadowing was pretty strong.  I got the idea that his greatest desire was to continue the dream of his father in making Arrakis more habitable, and anyone else he served or pretended to serve he was just using to get to that end.
What do you think of the Fremen culture?  Is this a culture you think you'd enjoy spending some time with?
The Fremen culture actually terrifies me.  In a society trying so desperately to survive and carve out a better future with the barest of resources their way of doing things is inevitably harsh.  They must maintain control through a very strict tribal structure heavily dependent on religious extremism.  I find their culture very interesting, but prefer observing it at a distance.

What do you think of Count Fenring's unusual verbal mannerisms?
Annoying and misleading.

This is a far future empire with very little in the way of computerization. Information is often passed down orally, and schools (such as the Mentats and the Bene Gesserit) have formed to train young people in memorization and information processing.  What are you thoughts on a scifi story that is very "low-tech"?  Does that sound like a feasable future? a ridiculous one?
Herbert has created such a bizarre mish-mash of processes(?) to replace computerization.  I like that rather than just a direct progression of the world's computer technology in the future things are scrambled up a bit.  And from what I recall it was because of an event in the past that caused a fear of computerization.  That in itself is interesting because the alternatives seem quite frightening themselves.  Can we really stop progress and innovation, or will it force it's way through any avenues it can find?  Also the power of the spice has more of a supernatural than a scientific vibe to it.  All of the really cool stuff they are able to do depends this cinnamon-like narcotic.  I don't feel that it's ridiculous so much as scary.

If you found the beginning of the book tough to get into, do you find that you're having an easier time with the middle portion, now that all the "set-up" is complete?
I enjoyed the beginning of the book, although it was a bit of work at times.  Part Two, as I mentioned previously, was a purely page-turning, heart-thumping experience, but not lacking in substance.  We're still learning so much about this world.
The center portion of the book is still pretty dialog heavy, but what I've noticed is the subtlety of the dialog. Things left unsaid are often more important than things that are said.  What do you think of that as a stylistic choice? does it make the dialog more interesting? less interesting?
I hadn't specifically noticed the subtlety and things left unsaid, but now that it's mentioned I agree that it's there and I must have liked it.  Perhaps that change in the style of dialogue is what kept things moving.

Dune was written in the 60's. Does it feel dated to you? How does it compare, writing style-wise, to more contemporary science fiction you've read?
I probably haven't read enough science fiction to answer this adequately.  I just keep thinking of a connection between the drug-like dependence on the spice and the drug-culture of the sixties.  Was Herbert purposely trying to make a connection?   Did events in the Middle East influence some of his depictions of the Fremen?  Did society's attitudes about computers at the time play into the story?  What was going on in the area of environmentalism at the time?  I should do a little research.
If you've never read this book before, where do you think the storyline is headed?
I've read it before but only remember bits and pieces.  In general, I find the book so original that it's pretty unpredictable.
Okay, back to HP.  We're on Goblet of Fire and although I dearly love those wizards and witches, my eyes are starting to cross.  Thank goodness for multitasking.