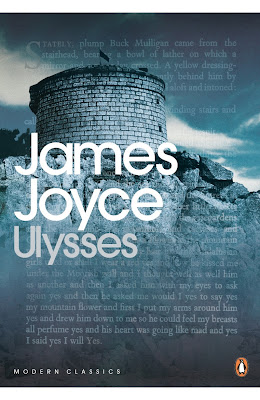 
What advantages attended shaving by night?
A softer beard:  a softer brush if intentionally allowed to remain from shave to shave in its agglutinated lather: a softer skin if unexpectedly encountering female acquaintances in remote places at incustomary hours: quiet reflections on the course of the day:  a cleaner sensation when waking after fresher sleep since matutinal noises, premonitions and perturbations, a clattered milk-can, a postman's double knock, a paper read, reread while lathering, relathering the same spot, a shock, a shoot, with thought of aught he sought though frought with nought might cause a faster rate of shaving and a nick on which incision plaster with precision cut and humected and applied adhered which was to be done. (787)
Happy Bloomsday!  (And happy shaving, if you're doing it at night.)
A long time ago, in a land far, far way . . . I read Ulysses.  Luckily, there's such a thing as post-traumatic stress disorder in reading, so some of my feelings remain etched in my mind even thought it's been a few months.
During my first year or two of blogging, I would occasionally do four-word or seven-word reviews.  For Ulysses, I actually had a few three-letter reviews pop into my head as I was reading:
TMI
WTF*
SOS
How's that for brevity?  If only Joyce had been so succinct.  He had me in the beginning, he really did, as I mentioned in my second post of the readalong.  And then:
Clapcop.  Clipclap.  Clappyclap.
Goodgod henev erheard inall.
Deaf bald Pat brought pad knife took up.
A moonlight nightcall: far: far.
I feel so sad.  P.S.  So lonely blooming.
Listen! (329)
And so forth.  I will say it was a very interesting "exercise" to read so many words strung together in many different forms throughout the book that I didn't understand at all.  It forced me to pay more attention to other things like alliteration and  rhythm.  It was more like listening to a song without words, or really more of an album, because each chapter is unique, though tied together by Bloom's day.
I was constantly questioning as I read whether I was spending my time wisely in reading what my mind was registering as gibberish.  I felt like a second-grader reading Shakespeare.  Twenty-percent comprehension maybe?  A few things helped me along though:
Overall, I honestly appreciated and was impressed by the innovation/experimentation of the text.  It was just too much.  Too long.  Too incomprehensible.  If each chapter had been a third of its length, I would have willingly dug deeper and tried harder.  But I just didn't have the mental stamina for over 900 pages.
If I were to read this again, I would set aside a year and a half and focus on one chapter a month.  Will I ever really reread it?  If I do, I may think of myself as Gerty MacDowell thinks of Leopold as he's sitting on the rocks:
Cuckoo
Cuckoo
Cuckoo
*I wanted to put WTH for "What the heck?"  because that's what would really come out of my mouth, but would anyone know what I was talking about?  You'd be like WTF is WTH?