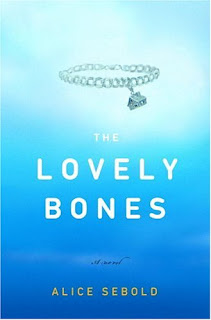 
"So you can't be certain that she's dead?" he asked.
"Nothing is ever certain," Len Fenerman said.
That was the line my father said to my mother:  "Nothing is ever certain."
For three nights he hadn't know how to touch my mother or what to say.  Before, they had never found themselves broken together.  Usually, it was one needing the other but not both needing each other, and so there had been a way, by touching, to borrow from the stronger one's strength.  And they had never understood, as they did now, what the word horror meant. (20-21)
I know it was eons ago that I was reading Ulysses and needed a few literary diversions to make it through, but I feel the need to talk about just one more before I actually attempt to review Joyce's "masterpiece".
The Lovely Bones deserves a bit of distinction as the only book that made me want to go running back to Ulysses!!!  Yes, you read that right.  This book scared the pants off of me and left me longing for the Joyce's never ending passages of ambiguous insanity.  But of course I couldn't put it down.
I knew what the book was about, and I knew it was something that I, as a big baby, would normally never read.  But a few people whose opinions I trust highly recommended it.  I literally sat with the book in my hands for five minutes deciding whether to open it or not.  Then I told myself I would just read 25 pages and then decide.  Well, by page 15 I was already traumatized!  Sebold doesn't waste any time, and once the hideous crime was committed, I had to read on in hopes of closure.
I'm guessing most readers are familiar with the plot of The Lovely Bones, but in a nutshell, a young teenage girl is raped and murdered, and tells the story of how her family and community reacts from an omniscient  vantage point in a heaven of her own creation.   The strength of the book is Sebold's ability to imagine what it would be like for a family to go through this situation, and then capture it beautifully in words. I found the horror of the situation combined with the lyrical psychological portraits to be very compelling.  Unfortunately, this effect dwindled as the book went on.  Things just seem to unravel in a haphazard way.  I didn't feel the closure I was hoping for, and felt a bit unsatisfied in the end. I think maybe I was just bent on revenge.  So I'm a big baby, but a vindictive one, I guess.
Regardless of my criticisms, I turned page after page frantically until I was done.  Did I even read Ulysses while I was reading this?  I don't really remember.  I think I was just relieved to return to Leopold Bloom, who was neither raped nor murdered and cut up into pieces and stuffed into a safe and thrown into a sinkhole . . . at least I don't think he was.

Stayed tuned for an actual review of Ulysses on June 16--Bloomsday! (Fingers crossed.) I'm going to try to cover up my lazy procrastination and make it look like I actually planned it this way...