Life has been busy, but I had to post about what I've read just to assure myself that I did get some reading time in, even though I read only a smidgen of what I would have liked to have read.  I'm already fantasizing about a reading binge in about a couple of weeks when a few stressful things come to completion.  Then it's party time!  (Or so I always think, and then I'm proven wrong.  But I have high hopes.)
One of my favorite April memories is our Spring Break Staycation in which the "fort of all forts" was built in our living room: 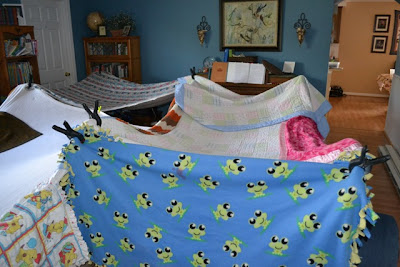 The picture just doesn't capture the coolness of it.  My kids spent several nights sleeping in it, as it was furnished with bed areas, and even an entertainment zone: 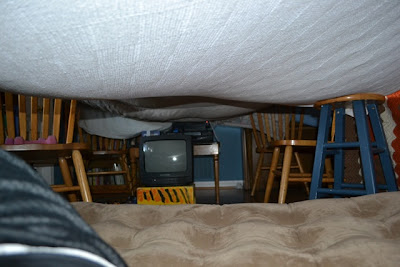 I was a bit jealous as I had to sleep in my own bed--not enough room for me in there.

Finished up this month

The Tale of Genji by Murasaki Shikibu  (Personal Enjoyment Rating: 2/5)
This only took me four months to read, and it was sheer compulsion that drove me through to the end.  At first I was entertained, especially by one long conversation in which Genji and his companions discuss what qualities they deem necessary in a woman.  These guys are going to be searching for a long time for a perfect woman that doesn't exist.  Which seems to be what Genji does, over and over and over again.  The repetition wore on me, but I had to finish what is considered by some to be the first novel in the world, written in Japan during the early 11th century.  There is much spontaneous spouting of poetic couplets, and lots of sleeves wet with tears (and snot, I presume).  Man, I really wanted them to invent Kleenex, those poor souls.

The Capture:  Guardians of Ga'Hoole #1 by Kathryn Lasky (Personal Enjoyment Rating 4/5)
I read this one aloud to my two youngest daughters ages 11 and 9 because my youngest had bought it at the book fair.  I'll admit, if I had read this alone I don't think I would have enjoyed it as much.  But my girls really got into it, asked so many questions, looked up pictures of owls on the internet, and just made it so much fun to read.  I was actually quite disturbed at the beginning of the book because the brainwashing of orphan owls creeped me out a bit.  I think maybe I've just read too much dystopian fiction and wondered where it was headed.  But it took a positive turn eventually, albeit with some fairly gruesome scenes, and ended with me feeling like I could fly if I just believe in myself.  BTW, the movie sucks compared to the book.

The Heart of the Matter by Graham Greene (Personal Enjoyment Rating 4/5)
In thinking back on reading this short novel, the plot seems almost unremarkable, almost boring.  But I so love the way Greene writes that I simply don't care.  In my fantasy reading/blogging world, I plan give this book its own post.  So I'll leave it at that for now.

The First Battles:  A Sourcebook on the Civil War by Carter Smith (Personal Enjoyment Rating 4/5)
I feel a little silly even mentioning this one.  It is the first of a childrens series about the American Civil War.  I just feel the need to express my frustration that I have not yet been able to immerse myself in all things Civil War-related in the way that I envisioned for this year.  Just a sprinkling is all I've gotten, and it's just not good enough.  Maybe over the summer...

Casino Royale by Ian Fleming, narrated by Simon Vance (Personal Enjoyment Rating 4/5)
I was really worried that I wouldn't be able to follow along with a spy novel in audio format, but this was really very easy to listen to.  It turns out the most difficult part was listening to M being read as a man.   I mean, isn't M a woman who sounds like Dame Judi Dench?  I'm obviously a James Bond newbie who only feels the need to watch Bond movies in which I can be mesmerized by Daniel Craig's eyes, and in which the sexism of Fleming's character is tempered by giving the job of the head of MI6 to a woman.

Tinker, Tailor, Soldier, Spy by John le Carre (Personal Enjoyment Rating 3/5)
Feeling quite proud that I understood Casino Royale, I moved on to this highly recommended Smiley novel.  But this book made me feel DUMB!!  I had to admit to myself that I do not speak spy!  I think it was really one that I need to read in print.  I loved The Spy Who Came in From the Cold, and am willing to give this another one another chance someday.  In the meantime, I'm going to try to watch the BBC series.  Then maybe I'll know what happened in the book...

The Name of the Wind by Patrick Rothfuss (Personal Enjoyment Rating 4/5)
I don't always appreciate comparisons to highly-popular books, but this one kind of struck me as "Harry Potter goes to university and drinks real booze instead of butterbeer."  There's much more to the book than that, but it sort of had the feel-good aspect of Harry Potter with a bit of an edge, and it was certainly not  a copy-cat of HP.  There's a lot of humor, ample adventure, and an overdose of romance in some parts.  Maybe my estrogen levels were just to low at the time, but the lovey-dovey parts are what took this original book down a point in my rating.  Otherwise, great entertainment!  I have the second book on hold, and some other patron will have to rush through it so I can get my turn.

In May, I hope to finally attempt a review of my experiences with Ulysses.  I just need to get a horrid history final out of the way first, and then hope there's something left in my brain to share.