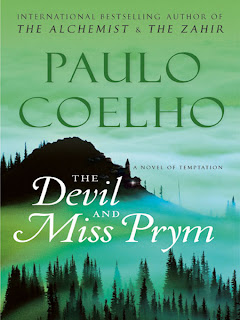 
Only 16 pages left of Ulysses!!! I suppose I should just go on and finish, but I need a little break from Molly's "sentence". It reminds me of the 80's song "88 Lines About 44 Women" by The Nails, only it's probably 2,000 lines and (mostly) about men.  Molly has taken TMI to a whole new level in this novel, which I didn't think was possible.  I had no idea Joyce was holding out a little grossness to spring on me in the end.
Thus I find myself wanting to share some thoughts on this short tale of Paulo Coelho's simply because it is quite the opposite of Ulysses.  Where Joyce's writing is earnestly complicated, and seems to avoid any inkling of a moral, Coelho's goal is simplicity, and to convey a message that will have some sort of uplifting effect upon the reader.
In the case of The Devil and Miss Prym, the question explored is whether mankind is inherently good or evil.  A man with a tragic past comes to the small village of Visco, and promises a large amount of gold to the village if they will agree to murder just one person.  Discussions and justifications follow, as the people of the town decide if and who will be sacrificed for the future prosperity of Visco, or in some cases, for their own selfish gains.
In the end, the predictable message is that each individual chooses between good and evil within, rather than mankind as a whole being one or the other.  Our choices can be influenced by fears of loneliness, punishment, failure, or loss of reputation, but ultimately we are responsible for our own choices. Forgive me, but my main thought upon finishing this was "Duh!"   Am I taking it for granted that most people feel this way already, or do I live in a bubble?
Whatever the case, I found the story interesting even if it was not paradigm-shifting.  I find myself underwhelmed by Coelho, but it may just be a case of inflated expectations.  On the back flap of the book cover, it says "Paulo Coelho is one of the most beloved authors of our time.  With sales of more than 75 million copies worldwide, his books have been translated into 61 languages and published in 150 countries."  With all of that fanfare, I think I just expect more of something.  Not just a reinforcement of something I already believe, expressed through a story that I found somewhat unbelievable.
Did Joyce care about whether mankind was good or evil?  I've done such a superficial reading of Ulysses that I can't be sure, but the overall feeling I get is that mankind is what it is, and that's all there is to it.  We live, we think, we die.   At least that's what I've gotten from the first 917 pages...