The Odyssey by Homer: Wrap-up

I have greatly enjoyed the readalong of The Odyssey hosted by Trish from Love, Laughter, and Touch of Insanity, I only regret that it all went on at a busy time and I've gotten behind in posting and reading posts.  What a great group of participants!  I have been so enriched and entertained, and I can't wait to read everyone's thoughts for the last couple of weeks now that things have slowed down a teensy bit.
One of the things that kept us busy in November was an odyssey of our own -- to San Francisco.  We even traveled in our beat-up Honda Odyssey that has taken us on many previous adventures.  Although we did not face the trials that our scheming man-of-exploits did, we did take a short, chilly voyage to Alcatraz: 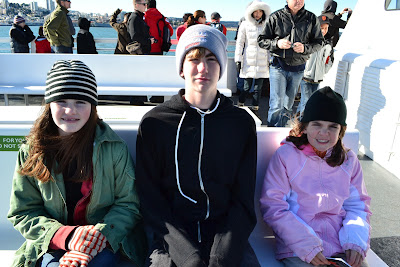 We weren't held captive, but we tried to lock a few of our crew in: 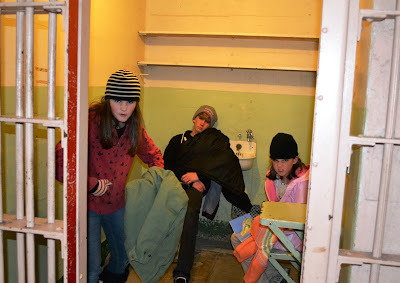 We were pretty smart and didn't kill any cattle, but we did visit with some livestock: 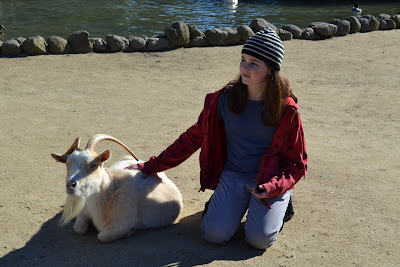 We feasted of course (without the sacrificial rites): 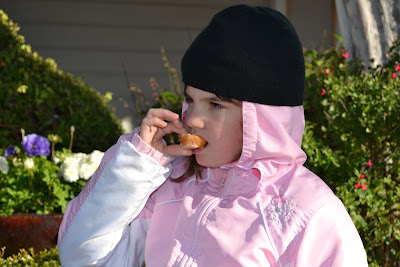 and tested our mettle by walking across the Golden Gate Bridge and back in the wind: 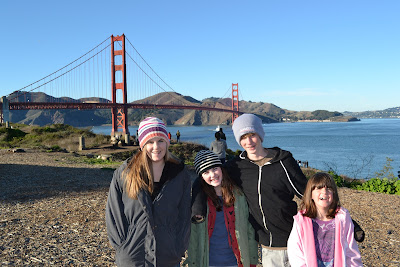 We didn't see any six-headed monsters, but we thought these jellyfish were pretty cool: 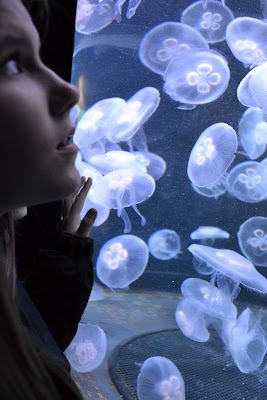 Really, the scariest thing we encountered was this giant Jelly Belly: 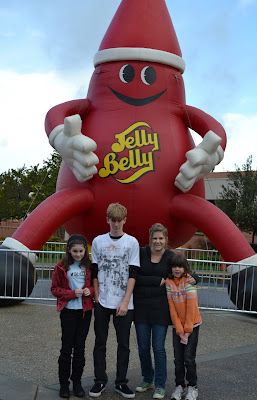 He looks pretty menacing to me.  Take away one eye and he's a dead ringer for Polyphemus.
But now back to Homer's Odyssey.  Like I mentioned in a past review of The Iliad, what I find most exciting about The Odyssey is how old it is.  We get this amazing peek at ancient Greek society and its people, and we get to try to figure out what makes them tick.  Sometimes, we feel a connection, and think that not much has changed over the millennia.  At other times while reading, we're flabbergasted at the things they deem to be valuable and moral, and we think, "What the heck is wrong with these people?"
To the modern reader, the story of Odysseus' perilous journey and his domestic troubles is mired in contradictions that can be just plain irritating.  How is it that the people who seemingly read and believe in a sign from every eagle they see in the sky can't believe it when they are repeatedly told that Odysseus has returned?  How can they be so forgiving of Helen, saying it is the gods' fault she did what she did, but then slaughter all of the women who fooled around with the suitors?  Why does Zeus demand hospitality amongst mortals, but then allows Poseidon to punish the Phaeacians  just because they like to help wayward travelers?  And why, oh why, is it okay for Odysseus to have his flings with goddesses while Penelope spends three years weaving a freakin' shroud for her father-in-law to delay any kind of relationship with another man?
I know that there are answers and explanations for all of these questions, but they are still striking and cause a certain amount of exasperation.  It doesn't help that the characters and gods always seem to be lying or in disguise, and as a result they always need to be "testing" one another.  They make things so much more complicated than they need to be.  But then, don't we do the same thing?  I know I can be a bundle of contradictions myself, and I probably make life harder than it needs to be.  I am human, after all.
I think in the end what connects us most to the ancient Greeks is our zeal for entertainment, especially entertainment that reflects our core values.  Those values may have changed, as well as our mode of reception, but just as regular joes 3,000 or more years ago listened raptly to the bards reciting their songs, we flock to the theaters to experience the latest installment of Harry Potter, or a few years ago, The Lord of the Rings.  Only instead of the mighty warrior who proves that "might makes right," we revere and embrace the unexpected, humble hero whose greatest power comes from love.  We've come a long way, haven't we?*
*And in some cases, we have a long way to go . . .