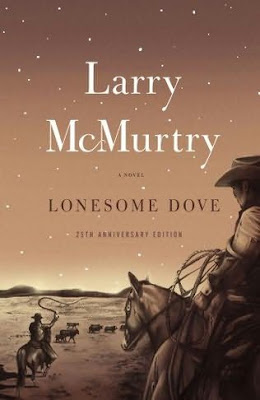 
"If you want one thing too much it’s likely to be a disappointment. The healthy way is to learn to like the everyday things, like soft beds and buttermilk—and feisty gentlemen."
It's a time when a man's trip to the whorehouse is as customary as a quick trip through a McDonald's drive-thru, and stealing horses from the country next door is all in a day's work. It's the 1870's, in the town of Lonesome Dove, where former Texas Rangers--the cerebral Gus McCrae and the workaholic Woodrow Call--own the Hat Creek Cattle Company.  When fellow Texas Ranger Jake Spoon returns escaping trouble, his descriptions of Montana lead Call and his crew to drive a herd of cattle north with the aim of starting a ranch there.  What follows is a journey of epic proportions, filled with light-hearted humor,  devastating tragedy, and heart-pounding adventure.  No wonder they made a miniseries out of it.
Speaking of epics, it was interesting reading this at the same time as The Odyssey, in which Odysseus' (supposed) main goal throughout his journey is to return to his home, wife and son.  Despite the many obstacles thrown into his path, he returns home and all is well.  In Lonesome Dove, however, many of men seem to be grasping for some sort of domestic happiness (sometimes subconsciously), but it remains stubbornly elusive (or stubbornly shunned, as in Call's refusal to openly acknowledge Newt as his son).  The connections they long for never really connect.  Even the two main female characters, Lorena and Clara, who seem to have a little hope of living life on their own terms settled in one place, are both left with an empty longing and regret for opportunities missed with those they loved.
McMurtry refreshingly defies the concept of the "love triangle." He creates instead a web of relationships, often with the "sporting woman," Lorena, in the center.   "Relationships" is actually a generous word choice--the men in the story tend look upon the women in terms of what pleasure or function can be derived from them, rather than as human beings with needs and thoughts of their own.  Gus is the only one who attempts to reach beyond this attitude, but in one instance, thinks he can buy this with money.  But his attempts at the very least  make him the most endearing character, and I'm sure many a reader has a bit of a crush and perhaps a daydream of a cozy evening with him in the tent (minus the dirt, of course).   Rather than a typical romance, the general theme seems to be men chasing after women who don't want them, women trying to break free from the boundaries imposed upon them, and all of them just trying make it through the latest hail storm or grasshopper deluge on the way to Montana.
During most of the end of the book, I had this song stuck in my head often.  In my head I was hearing The Rolling Stones, but found this cool Glee version:


The chorus of the song sums up the constant message I got from the book:  there are things we will always want or long for that we will never get.   But life goes on, and we somehow get what we need and make it through each day.  And it doesn't hurt when someone like Gus McCrae has got your back.