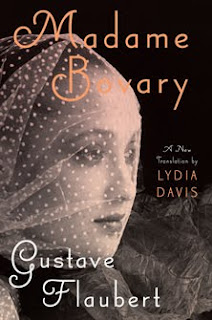 "She needed to derive from things a sort of personal gain; and she rejected as useless everything that did not contribute to the immediate gratification of her heart."
Group read of Madame Bovary hosted by Frances from Nonsuch Book.


This first part of Flaubert's Madame Bovary has been full of a few surprises for me, most notably that I'm really enjoying it.  I attempted to read it several years ago and was simply bored.  I'm chalking that up to an inferior translation, because so far in Lydia Davis' capable hands, I'm entranced.
(I should note here that I did not read the introduction.  Davis so graciously gives a spoiler alert before the intro, and I like to know as little as possible before beginning a novel, other than historical context.  I will go back and read it when I'm done, as I already have questions that are probably answered therein.)
I was a bit jolted by the transition from the beautiful embossed cover of a woman in a veil to reading this first line:  "We were in the Study Hall, when the Headmaster entered, followed by a new boy dressed in regular clothes and a school servant carrying a large desk."  Okay.  I was both impressed and perplexed.  It was not at all what I expected, and I love that.  We get to meet Charles Bovary here, and wallow in his average-ness. (I was really nervous when he had to fix the broken leg.  I wasn't sure if he was going to be able to do it or not.  I don't think he was so sure of himself either.)
I was also wrong in my preconceived ideas about the character of Madame Bovary.  We actually meet a couple of other Madame Bovarys before we get to the protagonist, all with personalities of their own.  The first Madame Bovary introduced is Charles' mother.  Her marriage is far from happy, and her "rebellion" is to suffer in silence and take on more of the responsibility for running the household.  Then Charles takes a bride.  She's ugly, bossy, high-maintenance, and just happened to lie about her fortune.  This woman so fit my idea of what THE Madame Bovary was like, but then she dies.  Huh?  But there's the captivating Emma, with her white fingernails, dry knuckles and beautiful brown eyes.  She's intelligent.  She's talented.  She was quite religious (albeit romantically so) for much of her childhood, until it doesn't satisfy her lofty longings.  Will Charles Bovary be the answer?  Well, if the fact that he just stands there empty-handed while Emma picks all the grass and thistles off of her wedding dress by herself is any indication, we're in for a bumpy ride.
One of the things I love about Flaubert's writing is the details.  There is frequent mention of clothing.  (I think Flaubert had a thing about hats.)   We have a lengthy description of how the wedding guests are arriving and what they are wearing, but only one phrase referring to the actual ceremony.  All we know is that it wasn't at midnight, by torchlight they way Emma wanted (big warning sign, by the way, Charles.)  I have a pretty sharp visual image of each scene and object, it's like looking at a vivid, realistic painting.
I'm getting quite lengthy here, so just a few briefly worded thoughts.