Something Wicked This Way Comes by Ray Bradbury 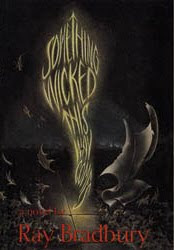 "And . . . here comes the carnival.  Death like a rattle in one hand, Life like candy in the other; shake one to scare you, offer one to make your mouth water."

"Why, most men jump at the chance to give up everything for nothing.  There's nothing we're so slapstick with as our own immortal souls."

Many times I wish I could turn back the hands of time and read a book at a younger age.  This is the case with Something Wicked This Way Comes.  Knock off about 25 birthdays, and I would be just the right age to get lost in this fantastical tale of horror.  But if I could really do it, really become that (relatively) carefree  girl of yesteryear with the super-charged imagination (and cellulite-free thighs), would I?  And what price would I have to pay?
The people of Green Town, Illinois are unwittingly faced with similar questions one autumn when Cooger and Dark's Pandemonium Shadow Show rolls into town.  Its sinister purpose is not to entertain, but to lure and entice for its own gain.  I could feel as I turned each page the longing of the characters to have their deepest desires fulfilled, and the magnetic pull of the carnival with its unspoken promises to give them what they want:  youth, beauty, sex--the usual suspects.
But not everyone feels the "pull."  Will Halloway, innately good, senses the danger, but those who are closest to him are not so immune.  His best friend Jim Nightshade wants to catapult into manhood while Will's father Charles Halloway longs to be young again.  The carnival has a way to give them what they want:  a carousel that adds or takes away the years depending on whether it goes forwards or backwards.  Want a ticket?
One of the novel's strengths is its characterization of Jim and Will. They're kind of allegorically flat and yet subtly complex at the same time.  (This phenomenon may actually be impossible, but it's the only way this wannabe English major can think of to describe it). I enjoyed the contrast between the two boys and the way they were written.  There was sort of a push-pull thing going on in the writing that I enjoyed.

As far as the scare factor goes, vivid images have been imprinted in my mind.  Freaky characters abound.  The Dust Witch will certainly be the star of my subsequent nightmares.  The evil of the carnival seeped into my bones.  I am now even more disapproving of carousels.
So why just a 3 out of 5 rating?  I got cranky with some of the writing.  Many times  it got in the way of the story. It felt jerky and sometimes forced.  When I'm  feeling that rush of getting to the end to find out what happened, I don't want to get tripped up by excess words and commas and phrases that I have to stop and decipher.   Surely this is breaking some unwritten rule of suspense writing. It's not  bad writing, it just felt misplaced.
So, back to the question:  If I could really go back, would I?  To read this book--I guess not.  To put on a swimsuit and gaze into a mirror at a youthful body sans stretch marks?  Maybe.  Just maybe. 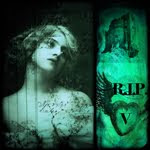