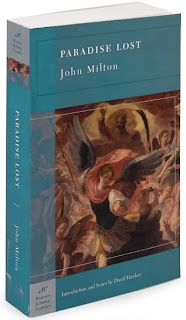 
Disclaimer:  If I have not comprehended correctly any part of this epic poem, or interpreted any aspects of it in error, it is only as to be expected from a descendant of Eve, as "all higher knowledge in her presence falls/ degraded, wisdom in discourse with her loses discount'nanc'd" (VIII, 551-553).
Maybe Milton is right--I should just give up on trying to read this high-brow, intellectual stuff.  Perhaps my feminine faculties can't handle it. But it calls to me sometimes, and I can't resist discovering for myself those works deemed as "literary masterpieces" by those who are in the know (both male and female, Mr. Milton.)  Here are a few of my thoughts, however skewed they may be, on my first reading of Paradise Lost, with some clumsy attempts at citing books and line numbers:
On Eve:  Man, I had such an urge to go burn a bra while reading this!  I know nothing more could have been expected of Milton given the time and place in which he lived, but it was hard for me to see Eve, the "fair defect of nature" (X, 891), get slammed over and over and over.  Her only redeeming quality according the rest of the cast--she's easy on the eyes.  But even her beauty is twisted into a dig.  She is "too much ornament, in outward show/ elaborate, of inward less exact" (VIII, 538-539). Go ahead and say it, Milton--you think she's a dumb blonde.  Eve, "th'inferior in the mind and inward faculties (541-542),  is only  looked upon favorably when she accepts her place as the "weaker" beside Adam.  After partaking of the fruit, Eve considers withholding it from Adam,  to "render [her] more equal, and perhaps,/ A thing not undesirable, sometime/ Superior" (IX, 823-825) to him.  She just wants a little respect, I think.  But fears of "another Eve" (is this our very first almost love triangle? Are you Team Eve #1 or Team Eve #2?), convince her to share the fruit with Adam.
On Adam: I feel kind of bad that I don't have too many thoughts on Adam as he is presented in the poem.   With his leanings towards falling prey to Eve's feminine wiles as "from about her shot darts of desire/ Into all eyes to wish her still in sight"(VIII, 62-63), it's hard for me to not to place him (and his relationship with Eve) in the context of contemporary stereotypes.  Once he and Eve partake of the fruit, the blame game begins.  Why, oh why, Adam asks, did Eve have to be created?  Wasn't there another way to "generate Mankind? (X,895).  But then she weeps at his feet, he remembers how beautiful she is, and decides to make his way in the world with "that bad woman."  I almost can't wait until she beats him up during childbirth.
On Satan:   Despite his grand introduction, he's not a really a heroic figure--he's a just pawn. Any power he has is derived from the Omnipotent One he is fighting against.   When he does get a bit of an inkling of the futility of his grab for power, he ignores it.  It's like a compulsion for him.  Even when "horror and doubt distract/ His troubled thoughts"(IX, 18-19) and he admits that "pride and worse ambition threw [him] down" (40),  his abhorrence for any act of submission and his vain pride drive him in his efforts to thwart God's plan for Paradise.  He is so proud of himself that in persuading Eve to partake of the fruit, he will have destroyed in one day what took The Almighty almost a week to build.  Does he really think that's the end of the story?
On the poem as a whole:  Without going into my religious beliefs, I should note that my thoughts are directed only at Milton's depiction of these characters.  Much of the poem is beautiful and his ideas about free will are right-on in my book. I could have done without the hundreds of allusions and comparisons, and learned to skim through areas where I detected lots of proper nouns.  But it was worth it to find several nuggets of striking poetry and stunning images.  There are potentially many things to discuss, and debates to be gotten into, but one thing is undeniable--it is amazing that the blind Milton dictated this mammoth epic poem to others to transcribe, including his daughters.  I have to admit if I had been one of his daughters, I might have been tempted to edit a little bit.  He would never have known!
Here's a quote that I have taken to heart:
That thou art happy, owe to God;
That thou continuest such, owe to thyself.
(Book V, line 520)