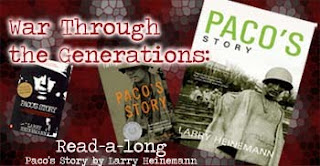 This post is part of a read-a-long in July hosted at War Through the Generations.
I actually attempted this a couple of times before forcing myself to continue.  The writing style seemed unnecessarily crowded with words, including curious word choices that just didn't hit home for me, and a generous dose of profanity.  But I've got to get out of my comfort zone every now and then, and I would expect that any depiction of the Vietnam War is going to be lacking in comfort.  I was braced for violence and language, but I find myself wishing the story could be told in a more straight-forward manner.  I am getting used to it as I go along, and perhaps I will discover a way that the writing style lends to the theme of the book.  I always like to give the author the benefit of the doubt.    Here are this week's discussion questions:
1. Who do you think the narrator is?
I'm picturing the narrator as one of the dead from Alpha Company.  He seems to be unlimited  in his knowledge as far as time or place goes, sort of a ghost narrator.  At the end of Chapter 1, he says "Oh, we dissolved alright, everybody but Paco, but our screams burst through the ozone . . .,"  including himself in the attack.
2. What do the opening paragraphs of Chapter 1 tell you about the narrator?
Well, he's a talker.  A storyteller.  If I'm understanding what he's saying, he seems bitter about those who do not want to hear about the war, or who want to sweep the stories under the rug.
3. How do you think Paco’s survival impacted the medic’s world view? And how did that change the medic?
It seems like he becomes overwhelmed by the pointlessness of it all.  When he encounters Paco, he gets to the end of his rope and can't handle it anymore:   "He was suddenly, finally, ready to admit that no matter what he did or how much, it was never enough . . .the wounded always died."  It sounds like his life consists of eating hard-boiled eggs with salt and mustard and getting drunk.  He says he would have been a good doctor, if not for Paco, the "guy not dead."
4. Is Paco’s Story narrated in a way that is “too” honest?
I don't feel like I'm a good judge of "honesty" without any personal knowledge of a particular event.  I think more of it as a case of TMI.  Did I need to know about his "pecker practice"?   About how the dancer's breasts reminded him of lumps of greasy hamburger? I haven't quite decided yet.