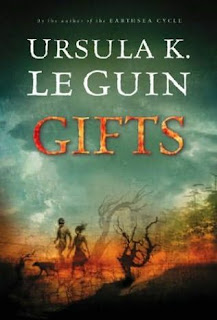 
Personal Enjoyment Factor:  4/5
"But will you tell me, now that you know I ask in friendship, were you born blind, Orrec?  Or those witches you told me of, from Cordemant, did they do this to you, in spite, or a feud, or a raid?"

I did not know how to put his question aside, and had no half-answers for it.


Young Orrec of the bleak Uplands is deprived of his sight when his father tells him that his hereditary "gift," the power of undoing, is a wild one--not subject to his will.  Orrec is terrified his power will harm those he loves, and so he submits to being blindfolded until he can gain control.  Even without the ability to use his gift, others in his small community as well as rival families look upon him with fear and awe, which his father uses to his advantage.  While Orrec goes through periods of frustration, grief, and self-doubt, he gradually discovers other avenues his gift may take, and he feels hope that he may be able to take control of his own life, and find happiness with the girl he loves.
Le Guin's writing is so striking to me.  It has a certain beautiful melancholy to it that draws me in.  The descriptions of the landscape and the culture, and the emotional experiences of the characters, are almost more compelling than the story itself, which is sort of static and meandering, but in a good, gentle way.  I enjoyed it a bit more than A Wizard of Earthsea, but the themes are somewhat similar--analyzing the nature of power and finding a balance between creation and destruction.
And, yes indeed, this is the beginning of a series, which seems to be my gift/curse these days--unknowingly picking up series-starters.  Gifts is followed by Voices and Powers and all three comprise Annals of the Western Shore.  I think they will make perfect summer reading!