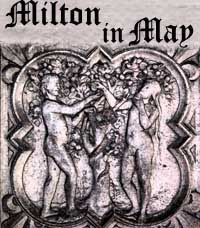 This month Rebecca at Rebecca Reads is celebrating the works of John Milton with a reading of Paradise Lost and any other supplementary materials of interest.  I'm pretty much a newbie to Milton, so my thoughts will likely be pretty basic. Pretend I'm in middle school.  I am highlighting each book with a different color pencil, after all.  Juvenile, but gratifying.  I'm looking forward to getting insights from more experienced readers which always makes my reading more satisfying.  Here are some questions Rebecca has asked to get the ball rolling:
1. Have you read Paradise Lost before? If so, what are your impressions on the reread? If you haven’t, what are your first impressions?
As I mentioned previously, this is my first time reading Paradise Lost all the way through.  I believe that we read selections in high school, and as I have been reading passages sound very familiar to me, but I'm not sure if that is from school, or from allusions in other literary works.
2. Epic proportions: Have you read other epics (like Homer or Virgil)? How does this compare so far?
I have read both the Odyssey and the Iliad, but not the Aeneid (thank goodness for spell check--I always forget how to spell that!).  It's hard to compare because the translation of the Iliad (Fagles) seems to be more intent on getting the story across with spare language rather than anything flowery, whereas I think one of Milton's main goals was to express his thoughts in the most beautiful language he could create.  In glancing through a few other translations of Homer's epics, I felt like the translators were also aiming for more of a lofty feel more similar to Milton's work.
I already feel a couple of gaping holes in my reading of epic poetry: Virgil and Dante stand out the most as works I would like to study.
3. What do we learn about Milton from his first-person comments on the story he’s telling? Do you like his asides?
I was very moved by Milton's direct reference to his blindness in the beginning of Book III.  I read through this part a few times because it was so beautifully written and I love what he's trying to say about his lack of sight becoming a strength to him rather than a weakness.   After describing the darkness and the things he is cut off from, he petitions a heavenly light to illuminate him in a  more powerful way:
So much the rather thou, celestial light,
Shine inward, and the mind through all her powers
Irradiate; there plant eyes; all mist from thence
Purge and disperse; that I may see and tell
Of things invisible to mortal sight. (lines 51-55)
4. The characters: Satan is the main character for most of the first three books. What do we learn about him? Is he appealing as the main character? Is he heroic? What do you think of Milton’s portrayal of the other devils in hell?
Satan is definitely the star of this first part, stealing the stage quite effectively.  I don't see him as heroic, although maybe I should look up the definition in a literary sense.  I'm not finding him appealing so much as annoying.  The stubbornness and pride rankle me a bit.  God has cast him out into this fiery pit, and still he refuses to admit God's omnipotence!  It's kind of a blindness, not seeing his own weaknesses, now that I think about it, that maybe can be compared/ contrasted with Milton's own blindness.  I'll think about that more when I don't have a headache.
5. The setting(s): So far, we see a lot of hell, and not as much heaven. What is your impression of Milton’s portrayal of the two locales?
Sad to say, hell does sound a bit more exciting!  Painful but vivid.
On a somewhat related subject, I was disappointed in the angel Uriel for not seeing through Satan's disguise.  I felt like one of my team mates let the other guy score!  Come on heavenly host, we've got to rally!  But then again, it does say "For neither man nor angel can discern/Hypocrisy, the only evil that walks/Invisible, except to God alone"(Book III, 682-684).  So I shouldn't be so judgmental.  But while it's true that "goodness thinks no ill/ Where no ill seems,"  I must confess that I do want the angels to be smart as well as good.


6. Will you continue reading?
I will continue to read, although my time frame may extend into June.  Luckily, Rebecca has made this low-key and I don't feel too much pressure like I would if I this was assigned reading and I had to be concerned about a grade.  It's nice to do it just for fun.  Although studying anything in-depth in a class sounds pretty exciting.