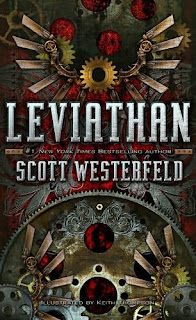 Just as parts of this unique story were a labor for me to swallow, I'm having a hard time figuring out how to spit them out again into some sort of a coherent summary. An attempt:  Imagine that you've been cramming late into the night for a test on World War I while mindlessly inhaling Cheetos and Coke, and then you fall into a fitful sleep in which you dream that the Allies are flying through the air in a giant whale sending out bats that poop out metal spikes, and the Central Powers are marching around in AT-AT Walkers from The Empire Strikes Back (and yes I am proud to say I had to look up the name of these Star Wars machines). You wake up a little disoriented, but then you go and ace the test.  It's a testament to Westerfeld's writing that somehow it all works out into an entertaining and meaningful story.
I'm a fan of the Uglies series by Westerfeld,  with my eyes practically dancing across the words to turn the pages faster and faster, but in Leviathan, with a brand-new lexicon to learn and imaginative machines to figure out, it took me a while to pick up the pace.  As encouragement to keep going as I processed everything, I met characters that I genuinely liked and cared about, and illustrations by Keith Thompson that are utterly captivating.  (The pictures even drew the attention of a few kids in the Peter Pan line at Disneyland who were desperately trying to get a better glimpse.)  Eventually, frantic page turning ensued, and I was engaged in a rollicking ride to the finish which was . . . a cliffhanger.  See you in October, 2010, Behemoth!