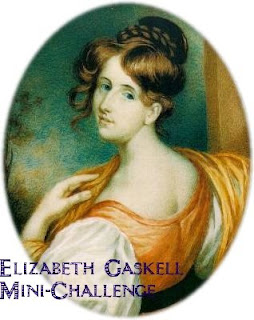 For the Elizabeth Gaskell Mini-Challenge hosted by Becky, I decided to read Cranford by Elizabeth Gaskell and watch the BBC series of the same name.  Both brought me so much enjoyment and satisfaction that I needed at the time--another reminder of why reading is so essential to my well-being!

Cranford is one of those "You had me at hello" books.  I remember reading the first page at my daughter's karate class, and trying to suppress a gleeful chuckle so as not to embarrass myself:


"In the first place, Cranford is in posession of the Amazons; all the holders of houses, above a certain rent, are women.  If a married couple come to settle in the town, somehow the gentleman disappears; he is either fairly frightened to death by being the only man in the Cranford evening parties, or he is accounted for by being with his regiment ... In short, whatever does become of the gentlemen, they are not at Cranford.  What could they do if they were here?" 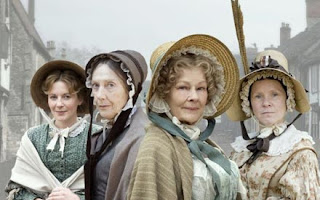 So, obviously, this is a book mostly about older, single women in the town of Cranford, after all "'A man ... is so in the way in the house."  But encounters with men do occur, and there are some young-uns popping in here and there (including the somewhat enigmatic narrator).  Not particularly plot driven, Cranford is more a collection of humorous and heartwarming sketches with delightful details of life in an English country town in the mid-1800's.   Each paragraph was a new joy for me to read.  I especially appreciated this description of  the bachelor Mr. Holbrook's sitting room:


"The rest of the pretty sitting room ... was filled with books.  They lay on the ground, they covered the walls, they strewed the table.  He was evidently half ashamed and half proud of his extravagance in this respect."

I can relate!  Also of relevance to my life is a chapter that begins with a discussion that "everyone has his own individual small economies"--their own special thing they are OCD about not wasting.  For the Cranford community, this could be paper, candles, even string.  For me--Ziploc bags.  I am a baggie-washer.

But personal tidbits aside, Cranford is about really about life, love, death, and the inevitability of change.  And a cat that eats valuable lace.  Which brings me to . . .


Cranford, the Movie
This is a must-see Brit Lit Chick Flick!!!   I don't even know what else I can say.  Perhaps just a heads-up that it is not only based on Cranford, but two other novellas by Gaskell.  The stories intertwine, which leads to some obvious changes in the original story, but it all works out wonderfully. 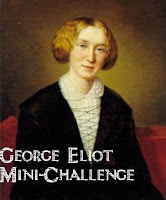 George Eliot Laments
As lengthy as this post already is, it seems like a good place to express my sadness at not being able to complete the George Eliot Mini-Challenge also hosted by Becky by the June 1 ending date.  I had planned on reading the two of Eliot's major novels that I haven't read yet:  Romola, and Felix Holt.  I did, however, acquire copies of each--one used from Amazon, and one for just a dollar at a discount book store.  Score!  I will read them soon, and mostly likely gush about the genius of Eliot.