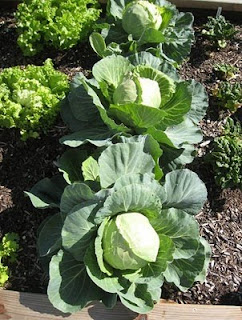 Cabbage from my garden.  Yay!
St. Patrick's Day was celebrated in our home with green macaroni and cheese, green Jello with pears, and roasted asparagus (some of which ended up sucked up in the vacuum after I accidentally dumped about two cups of salt over them--but that's another story.)  We don't drink alcohol, so we did our best by having some frothy rootbeer to guzzle down.  We threw in some Irish soda bread to the spread, but it was store-bought and as hard as the Blarney Stone. 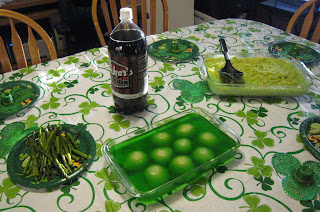 This very unauthentic celebration of Irish culture needed to be rectified somehow, so I thought I would read a couple of books about Ireland, and stir up my Irish blood in a way that did not involve listening to The Cranberries or Snow Patrol, or watching reruns of Ballykissangel.  My first selection was Brooklyn by Colm Tóibín, a Costa Book Award winner, and Man Booker Prize Nominee.  I used to have high expectations of prestigious award-winning novels only to come away less-than-awed in many instances.  As a result, this was a satisfying surprise.

Set in the 1950's, Brooklyn is the story of an intelligent but otherwise ordinary young girl, Eilis, who emigrates from Ireland to Brooklyn for a better job, with a strong nudge from both her mother and sister.  She experiences homesickness and depression but gradually adjusts to her new life.  She almost reluctantly falls in love with a persistent Italian-American man, but eventually has to return to Ireland because of a tragedy in the family.  It is then that she is really faced with deciding who she is, and who she will become.
It is this theme of identity that resonated the most for me.  At this point in her life, Eilis' identity seems very vague and incomplete.  She is very much defined by others--allowing them to direct her decisions in life and almost get swallowed up in their desires without thought for her own.   As she prepares to sail to America, she is reluctant to leave:

"The arrangements being made, all the bustle and talk, would be better if they were for someone else, she thought, someone like her, someone the same age and size, who maybe even looked the same as she did, as long as she, the person who was thinking now, could wake in this bed every morning and move as the day went on in these familiar  streets and come home to the kitchen, to her mother and Rose."

And yet she tells no one of her feelings, doing what is expected of her because she does not have the strength to be her own person.  This happens repeatedly throughout the book in different situations, and tends to get frustrating.
Consequently, I keep asking myself the question, "What drives this novel? What keeps the reader going to the end?"  The events of Eilis' life are fairly mundane, and if you're looking for action, you will end up throwing this book against the wall in exasperation.  What kept me hanging on was the subtly mesmerizing prose--the detached and unsentimental narration that nonetheless depicted the main character with such precise psychological insight.  The tension created by the contrasts between one's innermost thoughts and what is presented to others.  A somewhat unlikeable but believable protagonist.  In other words, excellent writing.

I wish I could say the same about 1916: A Novel of the Irish Rebellion.  To be fair, I'm sure author Morgan Llewellyn did not set out to write a literary masterpiece.  It's an average work of historical fiction with a few corny sex scenes thrown in for good measure.  I did learn quite a bit more about Ireland's Easter Rising, enjoying the sense of being in the middle of the action, but I felt very little connection to the characters.  Ned, the main character, survives the sinking of the Titanic, attends Saint Enda's school in Dublin, and becomes involved in the rebellion under the influence his headmaster, the soon-to-be rebel leader Pádraic Pearse.  Ned's sister marries a man she met in America, but ends up falling in love with her local priest, who also has feelings for her.  Throw in Ned's conflicting feelings for the prostitute Sile, and you've got a mediocre soap opera in the works.  But having said all of that, I think I may go on to read some of the sequels, which chronicle the continuing fight for Independence.  I'd like to learn more of the history, and of course I have to find out if Ned's sister and the priest get together . . .
There are so many other Irish-themed books I would like to get to, as well, but I will probably wait until next March to read them.  Any recommendations?