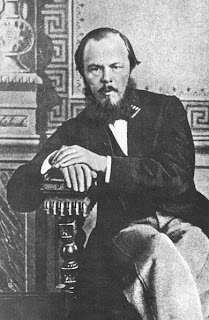 "It's all so strange, Karamazov, such grief, and then pancakes all of a sudden."
It is with great satisfaction that I have just clicked "read" for The Brothers Karamozov on my Goodreads account.  This book has been my faithful companion for the majority of April.  It has been with me to piano lessons, karate, the dentist's office, the hospital, Disneyland, Hometown Buffet, various parking lots, and even through the making of about 6,000 copies for my daughter's school.  I have read it while eating, biking (stationary, of course) and during those few minutes in bed at night when I inevitably fall asleep too quickly!  It has eaten up most of any leisure time I had this month (with the exception of watching some of Gilmore Girls Season 2 with one of my girls, but, hey--if your teenager actually deigns to engage in an activity with you, YOU DO IT.  Even if it involves setting aside some heavy-duty Russian Lit).
I looked into the audio version at one point, feeling the pressures of time as this was a group read, and discovered that this is 34 hours of reading material.  (War and Peace-56, Les Miserables-57.  So what am I complaining about?  BK is a novella by comparison).  Ultimately, I wasn't going to be able to get anything audio in a timely manner, so I scrapped that idea and resorted to reading in a manner that burns less calories.
Perhaps the hardest part was accepting this as almost the only book I read this month.  Yes, I had to give up my philandering ways, stop playing the field, and commit to a relationship with just one book.  Tiger, I think I get you now.  All is forgiven.
So it is with gratitude that I can now proclaim:
I loved it!
Thank goodness.  The story of three (or four) very different brothers, their detestable father who ends up murdered, a couple of histrionic women for them to fight over, and a dying priest all comes together like some sort of a high-brow soap opera from which you leave feeling like you've listened to a soul-stirring sermon.  Seriously, how often will you find a book like that?  Yes, I did come to fear the phenomenon of the four-page paragraph (Is there such a thing as post-traumatic stress from turning the page and seeing NO INDENTATIONS?)  But I did quickly get used to each character going by four or five different names.  I feel in some way I have kept Alzheimer's at bay with this novel brain exercise.  And whenever I was in danger of extreme boredom during the long religious discussions, I would come upon a thought that struck me, and this would happen again and again.  I feel like I need to make a little notebook just for quotes from this novel.  I could easily pull together my own sermon now, and it would be pretty darn good.
Because this was a group read, I feel as though I ought to discuss more of the details of the last portion of the book, but frankly I'm afraid to.  There is so much I don't think I would know where to stop.  At one point the narrator says, "I keep thinking that if one were to recall everything and explain everything as one ought, it would fill a whole book, even quite a large one."  Aside from the irony of that statement, that's how I feel right now.  Discussions could go on about this book indefinitely.  For now I will go check out what others from the readalong have to say.  Their thoughts, which are generally much more intellectual and in-depth than my own (I so appreciate them), should be found here. Thank you Dolce Bellezza for putting this together.  It made the reading even more enjoyable than it would have been on my own.
One last delightful quote from Mitya (or Dmitri, or Mitka, or Mitenka--take your pick):


"Rakitin says it's possible to love mankind even without God.  Well, only a snotty little shrimp can affirm such a thing, but I can't understand it."
The Brothers Karamazov
By Fyodor Dostoevsky
Originally published in 1880
Translation by Pevear and Volokhonsky 2002
776 pages
Personal Enjoyment Factor:  4.5/5