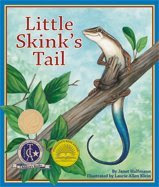 I don't usually review picture books, but I won an autographed copy of Little Skink's Tail from Shelly of Write for a Reader this last month, and my daughters just love it! My seven-year-old has read it on her own at least 20 times now. And as a parent, I found myself enjoying the story as well. It's one that won't drive you nuts after reading it for the umpteenth time. Little Skink gets his tail swiped by an owl, and imagines what he would look like with the tails of his fellow creatures. In some instances, this is pretty humorous as well as educational.

My daughter's comments:
"I like how the skink looks--he has a blue tail and a brown body. My favorite part is the picture of him with the squirrel tail and the squirrel looking at him funny."

The book has beautiful illustrations and a couple of activity pages in the back. Highly recommended for younger readers!

Thank you Janet Halfmann and Shelly B. for the giveaway!
Posted by Shelley at 9:03 PM