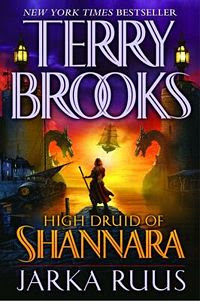 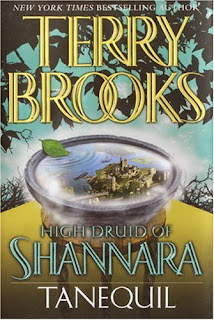 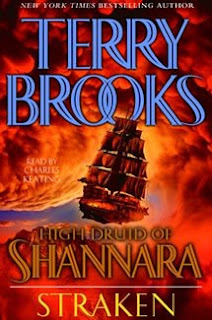 My overall rating of the series: 3/5

I absolutely love the first two series in the world of Shannara, and keep reading subsequent books in hopes of reliving the experience. But so far it hasn't happened. The Voyage of the Jerle Shannara was enjoyable but not exceptional, and the Word/Void trilogy was more of an urban fantasy that had me switching gears a little bit.
As usual, it's difficult to review a book in a series, especially one with so many installments. A plot description isn't going to mean much to anyone who hasn't read previous ones. However, I'll attempt a sketchy description:
The Ard Rhys (leader of the Druids), formerly known as the Ilse Witch, is sent into the Forbidding (the place where demons and other evil creatures have been banished by the Elves) by her political enemies. The only one who can save her is her young nephew, Pen Ohmsford, who has the necessary ability to "communicate" with plants and animals. Not surprisingly this involves a quest into unknown lands to obtain the talisman that will enable him to break into the Forbidding, and free his aunt.
The first two in this series, Jarka Ruus and Tanequil seemed a little fluffy to me. Brooks revisits his usual themes with a new generation of Ohmsfords trying to ignore their magical heritage, but any excitement and complexity are reserved for the last book, Straken. I can't really rave about any of these, but I did enjoy them as a fantasy escape. I still have hopes for the next and final series, The Genesis of Shannara, but it may be that the magic for me ended with The First King of Shannara.
Where this series fits in:

The Voyage of the Jerle Shannara
* Ilse Witch
* Antrax
* Morgawr