The Astonishing Life of Octavian Nothing, Volume II: The Kingdom on the Waves 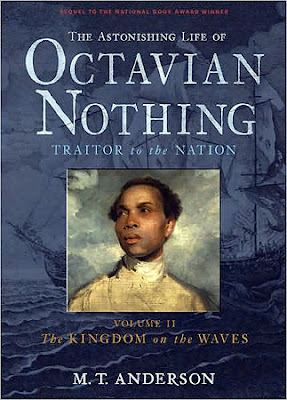 Author: M. T. Anderson
Originally Published: 2008
Length: 592 pages
Personal Enrichment Factor: 4/5
Amazon Rating: 4.5/5 (5 Customer Reviews)
Goodreads: 271 ratings, 4.23 average rating, 120 reviews
I mentioned a few things necessary to have on hand when reading Volume I of Octavian's "astonishing" life events. For Volume II you'll need only one thing: an antidepressant. I say this not to deter anyone from reading the book, only to properly prepare for a tough ride.

When the atmosphere in Boston becomes increasingly unstable, Octavian heads south to Virginia in hopes of joining Lord Dunmore's Royal Ethiopian Army. Freedom is promised to slaves willing to fight for Loyalist interests, and Octavian is among many with dreams of a new and free life promised at the end of the war. This is the most difficult part--reading of their hopes but knowing the reality that blacks will not begin to see significant change for many, many years after the war. Things, in fact, will get much worse.

As Octavian transitions from "Observant" boy to angry, hardened soldier, the brutal realities of war are recounted. Octavian's strength and comfort comes from stories--whether they be the ancient classics he has studied or the accounts of escape from fellow soldiers. He records their stories in his journal because "when we or our forbears passed over the water on ships, we lost our names and our stories; and now, in these ships, moving upon these waters, we shall regain them." Is this enough, though, to keep Octavian's spirits high? Consider this statement of Octavian's:

"I prayed that the Lord should destroy utterly the children of men. It seemed to me that we were a race so poisoned in every motive that we should never find happiness; for should felicity appear in one nation, another must sweep down upon it to destroy it; and it seemed to me that we must be obliterated with a new and profounder deluge: one deep enough to encompass all nations, so that Christ might begin again with a better creature."

Noah better get his ark ready.

My notes on this book can be found here.

Prude-ometer (subjective content assessment): Language, crude sexual language or situations, violence--but all seem to be an accurate part of war. I like this comment by the author in response to whether this book is appropriate for teens: "If we're going to ask our kids at age 18 to go off to war and die for their country, I don't see any problem with asking them at age 16 to think about what that might mean." There was one scene between two young male lovers but with the archaic language, I really don't know all that they were talking about. It remains above my head.
Posted by Shelley at 8:34 AM