The Astonishing Life of Octavian Nothing, Volume I: The Pox Party 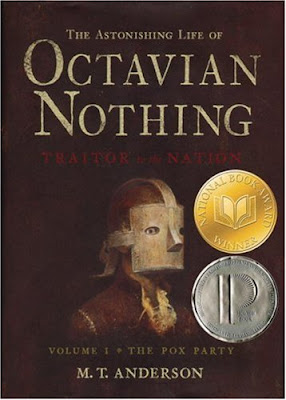 You need to have three things on hand for reading this book:
1. A punching bag
2. A dictionary
3. A box of tissue
Octavian is a black boy growing up in pre-revolutionary Boston, under the tutelage of an eccentric group of scientist/philosophers who form the College of Lucidity. He has been told by his mother that they are of royal lineage, and with childlike acceptance doesn't question the bizarre experiments and lessons he is the object of (like the weighing of his poop). Octavian learns that he is part of an experiment to determine "whether the capacities of the African are equal to those of the European." At first the terror of it sits just under the surface. Then, the College loses its funding when Octavian's mother (justifiably) insults their main benefactor, and the college is taken over by the sinister Mr. Sharpe, whose aim is to please a group of greedy southern contributors wanting proof (however skewed) that the African is inferior. There are a few characters involved in all of this that I became so angry with. I just wanted to strangle/maim/shoot/mangle them. Hence the need for a punching bag.

A dictionary on hand is also necessary. The book is written primarily from Octavian's point of view in 18th-century English, with many ancient classical allusions laced throughout. It comes across as slightly pretentious, but is true to his character, he having been given the finest education available. He not only has been taught the classics, but he reveres them. Something about the writing reminded me of Jane Eyre. Maybe the gothic feel of it, maybe the first person narrative--I can't really pinpoint why I got this impression.

There are some situations that would be major spoilers to mention, but I, sensitive soul that I am, saw fit to shed some tears and needed some tissue on hand. At one point, Octavian has an entire section scribbled out, and the emotional impact of it is pretty strong. Also some of the writing in this I found brilliant and moving. Bono, a servant in the household who Octavian looks to as an older brother says this about the attitudes of the white society:

This is just one of many excellent passages, I'll let you discover them for yourself if you choose to read this. I was transfixed and had hard time putting it down. I've described my rating as an "enrichment" factor rather than "enjoyment" factor because it is not exactly pleasurable to read--it's dark and gritty and tragic, but definitely worthwhile and satisfying.
I found a couple of articles about M. T. Anderson worth reading:

My notes on the book can be found here at ChainNotes.

Prude-ometer (subjective content assessment): Mild language here and there, a reference or two of sex from Roman texts (you know how those Romans were), a couple of disturbing scenes of abuse. Classified as Young Adult, but as a parent I would consider individual maturity.
Posted by Shelley at 1:30 PM