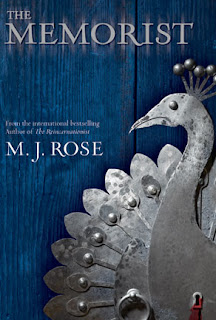 
This review is a stop on a TLC Book Tour. For other reviews on The Memorist this week, check out these sites:

Tuesday, January 20th: She is Too Fond of Books

Reincarnation. Meer Logan doesn't believe in it. She has convinced herself that the disturbing memories and music that disrupt her life are created by her imagination, despite the insistence of her father, whose experiences and study of Kaballah have shaped his belief in past lives.

When a gaming-box that once belonged to Beethoven, a feature of Meer's memories, is put up for auction in Vienna, a series of events unfolds that leads Meer to question her skepticism. The box contains clues that lead to a simple bone flute that allegedly has the power to reveal the past lives of its listeners. As Meer travels in Vienna, memories from an 18th-century life surface which help her come closer to finding the flute's hiding place.

Whether you're a believer in reincarnation or not, the concept is an excellent tool in this book to merge together events from ancient India, 18th-century Europe, the Holocaust and the present day--not an easy task! I also appreciated the reverent nod to the power of music throughout the story, both negative and positive. Time to break out the Beethoven CD!
If you're like me, and you get excited about things like exploring Roman catacombs , getting up close and personal with historic artifacts, and figuring out the clues to a treasure hunt, you should enjoy this one. I'm no expert on this genre, but this story did keep the pages turning, my heart pumping, and my mind pondering.

PRUDE-OMETER (subjective content assessment): excessive language by one of the minor characters, attempted war-related rape scene near end of book, non-graphic violence.
Posted by Shelley at 8:36 AM