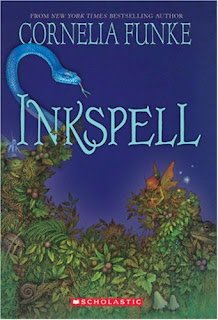 At the closing of Inkheart, many of the characters receive their happy endings, except for Dustfinger, who is still trapped in a world to which he doesn't belong. Inkspell begins with his successful reentry into Inkworld, by the mouth of Orpheus, who is secretly working for Basta and Mortola. When Farid begs Meggie to read him into the story to go after Dustfinger, Meggie insists that she go too. In revenge for Capricorn's death, Mortola has Orpheus read Mo into the story to be killed, but Resa clings to him and goes as well. However, for all of these characters who find themselves in Inkworld, nothing is as anyone expects, and things can change instantly with the touch of a pen to paper.

One of the things I like about Funke's stories is that they always go in directions I would not expect. It's not that there are any big "twists" in the end, I'm just always pleasantly surprised at what adventure comes next or how a conflict is resolved. Of course I also love the tributes to reading and writing. Fenoglio's part in creating Inkheart makes me think of the godlike power an author plays in forming a world and its characters, how he/she may get attached to certain characters, and gleefully revel in the creation of a truly horrible villain. Fenoglio really seems to care about his friends, but is constantly blindsided due to his arrogance. He's such an interesting character. And if I was a little in love with Dustfinger in the first book, my love has deepened (be still my heart!) with reading Inkspell. I wonder, since this is a young adult book, if younger readers fall for Farid, while the ones like me (with a few frizzy gray hairs sprouting out of my head) prefer Dustfinger?

My notes on Inkspell (mostly just a summary of chapters which will be helpful when the library finally has Inkdeath available for me!)

Prude-ometer (subjective content assessment): Super mild language here and there.
Posted by Shelley at 10:52 AM