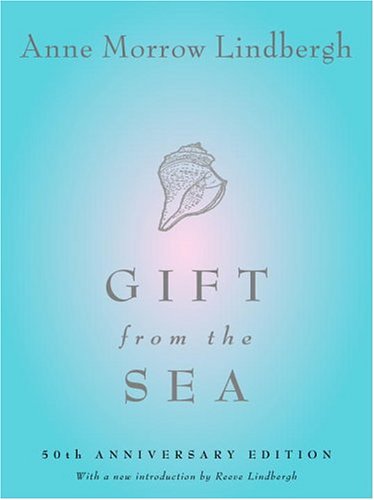 Gift From the Sea by Anne Morrow Lindbergh (1955, 132 pgs.): What amazes me about this little collection of the author's musings on womanhood and relationships is how things have really not changed that much in over 50 years. I personally find great comfort when I find someone whose thoughts mirror my own, and obviously there are many others who feel the same way, as this book continues to be popular. My one complaint is that I felt that the comparisons between different stages of a woman's life and the various sea shells was too forced. I would have enjoyed the book more without this structure.

Twelfth Night by William Shakespeare (1601): Shakespeare for me is more of a game or puzzle than a traditional literary experience. For me trying to make sense of the words in a Shakespearian play fills that same need that drives others to do crossword puzzles or Sudoku. The plays that I have read recently I have read on Barnes and Noble's "No Fear Shakespeare," where they have the original text on one side, and a "translation" of sorts into modern language on the other side. I like to puzzle over the original and figure out what it means, and then check to see how close I am. Sometimes I'm right on target, and other times I have made up something completely off the wall. I read Twelfth Night because my daughter's third grade class is performing a version of this in June, and I wanted to be fully prepped for the experience! This one is a comedy filled with unrequited love, mistaken identities, and gender mix-ups. Orsino is in love with Olivia, Olivia is in love with Cesario (who is really Viola dressed up as a man), Viola is in love with Orsino, who thinks she is really a man, and ambitious Malvolio, Olivia's head servant, is tricked in to believing that Olivia is in love with him. Throw in a witty fool, a drunk uncle, and of course, Viola's twin brother who she presumes is dead, and you've got quite the soap opera. It was not one of my favorites, however (out of the mere 6 that I have read!). I'm guessing I will enjoy my daughter's performance better!

Shake Down the Stars by Frances Donnelly (1988, 642 pgs.): This out of print book was loaned to me by a friend who found it in a common room while she was in Alaska over ten years ago, and she fell in love with it and lent it to me to read. It follows the story of three very different young women who come from the same village in England, and how the war affects their lives. One girl I liked, one I wanted to shake her and tell her how stupid she was being, and the other I wanted to shoot. And yet I found myself attached to all of them, and I loved to see their imperfections along with their strengths. There are some interesting love scenes thrown in (to me they seemed like a man wrote them, and one of them made me laugh), and the characters don't exactly live a life of purity. There are some references to abortion, as well as one abortion scene that I personally found very disturbing, but I think that was the author's intention. The book was almost as much about feminism as it was about romance. But, to be honest, the romance was the part that I liked. I'm wondering if there is anyone else out there who has read this? I don't know how popular it was when it came out.

Bridesmaids Revisited by Dorothy Cannell (2001, 256 pgs.): I was excited "revisit" the Ellie Haskell mystery series, having loved Wuthering Heights and The Thin Woman, but I was disappointed in this one. Ellie receives a letter from the "bridesmaids," three friends of her grandmother, telling her that her grandmother has a message for her. The problem is, as you've probably guessed already, her grandmother has been dead for a while. As usual, this story involves uncovering family secrets, eccentric characters, and humorous allusions to Gothic mysteries. It just wasn't up to par with the other two I had read.

Femmes Fatal by Dorothy Cannell (1994, 304 pgs.): Another Ellie Haskell mystery (I was in the mood for fluffy reading!). This was like "Desperate Housewives meets The Carol Burnett Show." Ellie feels like her marriage is lacking in passion since she had twins, and so she joins Fully Female, a club that promises to help a woman "fulfill her physical, emotional, and sexual potential." (It sounds racy, but it isn't really.) After not too long, people start dying, and it's up to Ellie to find the culprit. I had a few laughs, and it was an entertaining diversion, but it wasn't as good as others in the series.

A Wind in the Door by Madeliene L'Engle (1973, 209 pgs.): This is a companion to A Wrinkle in Time (one of my favorites) that I have had on my bookshelf for a while, and I kind of wished I had just left it there. Reading this made me understand people who have a distaste for fantasy. It was just way too fantastical for me. Like a drug trip or something. I appreciated the themes she was trying to convey, but not the story she used to convey them.

Veil of Roses by Laura Fitzgerald (2006, 320 pgs.): If you're looking for a great feel-good chick flick in book form, this is it. Iranian Tamila has three months in America to find a husband or she has to return to her restricted life in Iran. One prospect for her is a man who is an obsessive germ freak who insists she have a full medical exam before he will marry her, and another is gay, just trying to make his mother happy. During this husband-choosing process, Tami meets Ike, the blue-eyed dreamboat who works at Starbucks. She also becomes friends with her fellow students in the English learning class, including an pregnant, abused, mail order wife from Russia, and a "colorful" (especially in her language) soldiers wife from Germany. Through the story, Tami seems to be finding her own voice that she has never had the freedom to express. I laughed, I cried, it moved me.