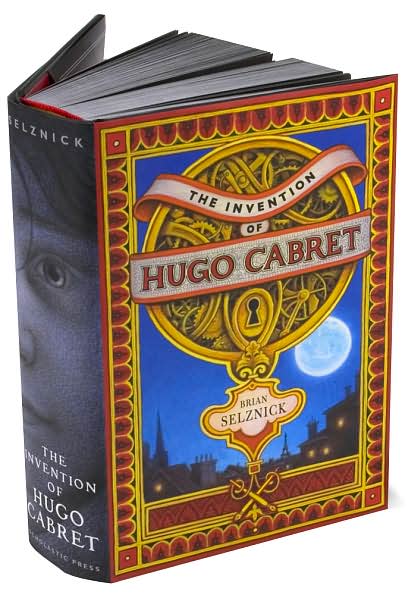 Those familiar with this book will probably wonder "Why the heck did they listen to a Caldecott winner?" Well, the answer is, I didn't know that it was, despite my son repeatedly telling me that he had heard the pictures were really cool. Once we checked out the book at the library, I realized just what we were missing out on. But we did listen to the whole thing, which was excellently narrated and has a strong enough story to stand on its own. I have asked Anna (9) and Jeremy (11) to write their thoughts on this unique novel:
Anna:
The story is about an 11-year old orphan named Hugo Cabret that works on an invention called automaton. Hugo steals from a man that works at a toy booth to get stuff to build the automaton.On his way to get stuff, Hugo meets a girl who sort of helps him. I think this story is for boys and girls. I thought that it was a good book and it contains lots of detail.

If I had to give Hugo Cabret a rating from 1 to 5, I would give it a 4.5. It is a book with a good plot and it is suspenseful at times. My favorite part was the part where the Automaton was drawing the picture. At first it just looked like random scribbles, but then it revealed itself as...random scribbles! Actually, it was drawing a picture, but I can't tell you what is was of. That might ruin the story. Although, I might have already ruined the story by telling you it is a picture. Ah well. Anyway it was a good story that I think a lot of people will enjoy. (The book is better than the audio-cd because it has pictures.)